Loading...
High & Low -The Prequel- / Capricciosa!!
READ THIS BEFORE EDITING THIS PAGE 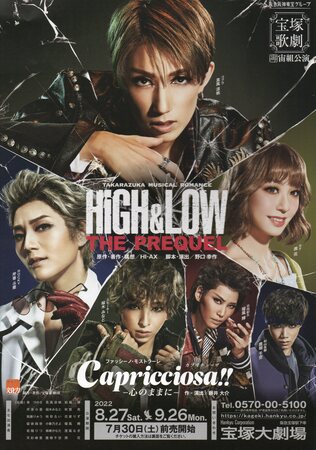 In the past, a legendary gang called Mugen ruled the area. Mugen had controlled the entire area with its overwhelming power until it suddenly disbanded. That led to the transformation of the well-controlled area by Mugen into a lawless one, but on the other hand, it opened a new chapter of five emerging gangs that took control of the area on their separate territory. Each of these five gangs fights to protect what they value respectively:

Sannoh Hoodlum Squad is the second generational brawlers of the Sannoh Street, which was formed to protect their hometown from any outlaws.

White Rascals, aka the tempting white devils, fights to protect women who have been abused and hurt.

Oya High School is the notoriously brutal high school where delinquent students across the country attend.

RUDE BOYS is the protector of the lawless neighborhood called Nameless Quarter where people who have no family live together.

Daruma Ikka, also called the "Family of Revengeful Destroyers", is a violent gang.

Taken from the initial of the five gangs, the area came to be known as the SWORD area.

This is the story of the end of one summer, on the eve of the SWORD’s formation.

Cobra, a former member of Mugen, founded a gang named Sannoh Hoodlum Squad with his childhood friends including Yamato, another former Mugen member. Since then, they have been spending all their time fighting only for the purpose of protecting their hometown. One day, they obtain an invitation to a party hosted by White Rascals, a powerful gang in the Rasen district. "Something life-changing might be there!" Yamato and the members of Sannoh Hoodlum Squad get excited about a great chance to know their rival. In contrast, Cobra, who doesn’t like meaningless fights, feels uneasy about it. However, Cobra reluctantly goes along with them to the party as the leader of Sannoh Hoodlum Squad.

The party is held at a luxurious old western-style house in the outskirts of town. The invited guests begin dancing when ROCKY, the leader of White Rascals, calls out "Party Time!" Cobra and his members, wearing white clothes and masks according to the party’s dress code, are sneaking into the crowd of guests. Then ROCKY stands up to announce the opening of a new nightclub Club Heaven, which is supposed to be like a paradise for working women in the nightlife district. At that moment, a woman comes running out, while arguing with a member of White Rascals. Her face looks familiar to Cobra. "No way! Is that…" He mutters quietly. Watching her leaving, Cobra senses that she is in some kind of trouble. He chases after her.

"You’re Kana, right?" Cobra talks to her. The woman Cobra meets again after several years is his childhood friend Kana. After learning that they have not changed at all on the inside while they have grown up in appearance, Cobra and Kana have a chat as if they were back in the old days. However, Kana tells a shocking truth to Cobra: "I’m going to die… soon…" Told by her doctor that she has only six months to live, Kana has prepared her bucket list. Saying she wants to fulfill her unfinished things in her hometown before the end of her life, Kana asks Cobra to tour around the town with her. Cobra fears that having more things to protect will weaken his fighting ability. That’s why he refuses at first, saying that it might bring danger to her. But he finally gives in to her pleading.

Things seem precious by living every single day as if it were your last day… Empathizing with her, Cobra fulfills one by one on Kana’s bucket list. At around the same time, ROCKY finds out that Cobra of the Sannoh Hoodlum Squad is the one who has taken Kana away. The reason ROCKY cares a lot about women is because his mother and sister took their own lives when he was a child. Intuiting that Kana’s behavior resembles that of his mother before her death, ROCKY orders his subordinate to spy on what Cobra and Kana are doing. In the meantime, a mysterious group appears to take control of the Sannoh Street. Shortly afterwards, the situation develops into a major war involving all five rival gangs: Sannoh Hoodlum Squad, White Rascals, RUDE BOYS, Daruma Ikka, and Oya High School.

"Capricciosa" means "whimsical" in Italian, describing a person who prefers doing things their own way.

This revue follows the vagabond Capricciosa on his adventures that take him to various locations in Italy. Enjoy the powerful, sexy, alluring atmosphere this show creates, starring Suzuho Makaze and the many unique members of Cosmos Troupe.