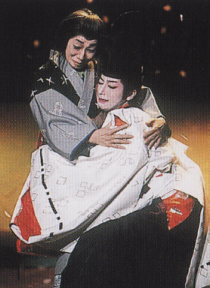 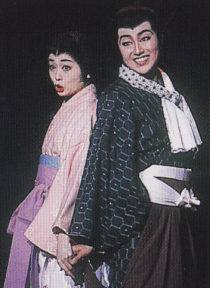 Yasu sold her son so that he could survive. The young man grew up successfully, becoming the feudal lord Fujiwara Michitada. He returns home and greets his mother, introducing himself and clinging to her. Driven by remorse, Yasu stubbornly rejects him.... (A folk story of the San-in region.)

A mischievous little love goblin falls in love with Oyae, a village girl. But Oyae is secretly in love with Yata, a boy from the same village.

To distract himself from his sorrow, the little goblin plays tricks on the villagers and lets three of them drop from a small bridge into the river.

One day the little goblin observes how Oyae tries to confess her love to Yata, and how Yata remains ignorant. After Yata went to work and left a sad Oyae behind, the goblin takes Yata's form and confesses his love to Oyae. Oyae is very happy; she doesn't suspect anything.
When the real Yata returns, the Goblin hides. Yata doesn't know what happened and why Oyae is behaving so strangely.
The game continues. The real Yata, still ignorant, leaves and it's Oyae who is confused at Yata's strange behavior. The goblin disguised as Yata returns and reassures her of his love. Oyae is happy again.

The three villagers return to the bridge with backup to take revenge on the goblin.
Oyae and the goblin are also by the bridge when the villagers arrive. The goblin, still in disguise, lets them all drop into the water from the bridge and finds it funny that they want to fight him. The village headman promises a reward to the man who successfully fights the goblin, and the Goblin disguised as Yata accepts the challenge (as Yata).
The goblin leaves the scene; and at the shrine near the bridge Oyae prays for Yata's victory. The goblin hears her prayer.

Meanwhile the real Yata returns, and again he knows nothing about what's going on. Since the goblin accepted the challenge as Yata in front of the villagers, they push the real Yata into the fight. Yata turns out to be not very brave and tries to hide from the goblin who challenges him.

Eventually, they do fight, and the goblin lets Yata win because it was Oyae's wish. The villagers celebrate Yata as a hero, although Yata himself doesn't really know how he won.
Now that he is a hero, all the girls are trying to get Yata's attention. The reward the headman had in mind was his daughter. But before Yata can marry her, he has to fight the goblin again before the women's eyes.

Oyae realizes that with Yata's victory she suddenly has competition for his affection. She prays that Yata will lose the fight this time. The goblin hears her prayer again. He is confused and doesn't really understand the back and forth, but since it is Oyae's wish and he loves her, he defeats Yata.
The villagers are no longer interested in Yata and leave.

When he gets out of the water, there's only Oyae waiting for him and the two of them finally get together.

Seeing the happy couple the little goblin gets homesick. He wants to go back to his mother and returns to Mt. Haguro)1.

)1 Mt. Haguro is one of the three sacred mountains of Dewa (old province of Japan).

Part of the 2003 Bow Workshop series, celebrating the 25th anniversary of Bow Hall.