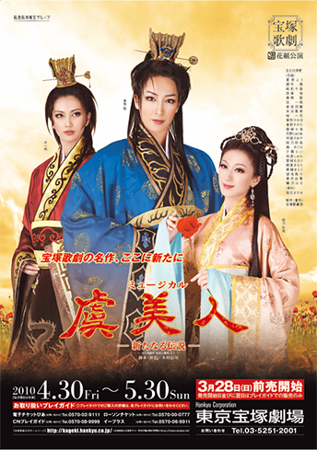 Our story is set in the third century BC in what is now known as Qin Dynasty China. The death of Shin huangti, the first leader strong enough to unite the warring states, has led to uprisings against the Qin hegemony in each territory. Out of all this chaos, Kou U, a general from the Chu State, emerges as a supreme warrior. Together with his uncle, Kou U has seized control of Kaikei. From his newly-acquired stronghold he begins to raise an army.

Kou U is beloved of a princess named Gu Bijin. Having confirmed their love for each other, Kou U and Gu Bijin have taken an oath to live together. As a result,whenever Kou U goes off for battle, Gu Bijin can be found at his side.

Around the same time, a young man who has grown up in Hai Prefecture by the name of Ryu Ho has gathered together some of his friends with an eye to taking the imperial throne. Ryu Ho is blessed with an innate ability to attract people to his side. When he hears of Kou U's army, he decides to join forces with the Chu general.

The first time Kou U and Ryu Ho meet face-to-face is at the Chu encampment in the region of Houjou. In trying to revive the Chu state, Kou U and his associates bestow the name of Kaiou on a young man with noble blood and having installed Kaiou as the ruler of the Chu state, they pledge to support his reign. Kou U is severe in his condemnation of generals who pull the strings from the shadows while the 'King' rules by name alone. Ryu Ho is not shy in expressing his opinion to Kou U, and Kou U notes the young man and his vocal opinions and impressed by his fearless manner, Kou U and Ryu Ho become sworn brothers.

Meanwhile, in the towns and streets the populace is tiring of all the political upheaval and turmoil. Tou Jou, a young lady whose father was governor of Kaikei until his life was taken by Kou U, has taken to hiding her real identity and is working at a downtown drinking establishment. One day, Tou Jou is being harassed by a group of men when a young man by the name of Kan Shin comes to her aid. This scene is witnessed by Han Zou, military advisor to Kou U. Having taken note of Kan Shin's bravery and martial prowess, Han Zou is quick to introduce him to Kou U.

In order to provide some respite to a long and tedious journey from battle, Kou U and Gu Bijin are introduced to a young boy by their loyal vassal Ei Fu. The boy is an accomplished artist and catches the eye of Gu Bijin. Little do they know that this 'boy' is actually the young lady Tou Jou. Harboring a grudge against Kou U for the death of her father, Tou Jou seeks the counsel of Ryo, wife of Ryu Ho. Still in her guise of the young boy, Tou Jou infiltrates Kou U's inner circle. Gu Bijin, having no idea of Tou Jou's true intentions, takes the boy under her wing and he becomes her regular companion.

Kou U leads his forces northwards, in order to clash with the Qin general Shou Kan. Meanwhile, Ryu Ho heads west. Both men have the same eventual destination : Kanyou, the capital of the Qin dynasty. Entering the region of Kanchu, both men swear that they will emerge as the rulers of this new land. Kou U in his own style engages in a ferocious battle with Kyo Roku and In Kyo, emerging victorious after a bloody struggle. Kou U has one approach, to make the world bow to his might. On the other hand Ryu Ho listens to his military advisor Cho Ryo and is able to avoid meaningless conflict by persuading those that oppose him that joining forces and cooperating is the better option. Thus Ryu Ho makes progress without bloodshed. By using his head, Ryu Ho wins the race to gain control of the Kanchu region. By entering into Kanyou listening to the sound advice of his military sage Cho Ryo, Ryu Ho shows wisdom beyond his years and begins to ride a groundswell of public support for his rule.

Finally Kou U makes his way through to Kanchu only to find that the border town of Kankokukan has been sealed under the strict orders of Ryu Ho. Han Zou is quick to recognize the unbridled ambition of the young Ryu Ho and advises Kou U that it would be in his best interests to eliminate this rival.

Our story is of two heroes locked in a desperate battle for power and control. The great prize at the end of all this scheming and bloodshed is to hold the empire in the palm of one's hand. Who will prevail? Will it be the great warrior Kou U, or the clever Ryu Ho? Only time will tell…