Loading...
Fortississimo / Silk Road
READ THIS BEFORE EDITING THIS PAGE 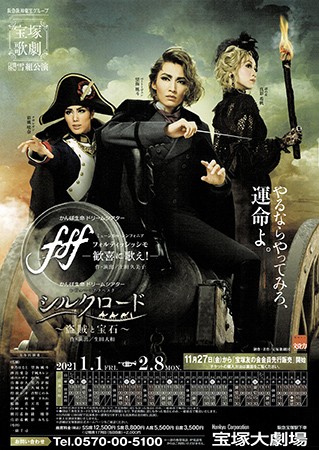 Due to COVID-19 concerns, the number of actresses on stage at a time has been reduced for both runs. The younger cast members will be split into two groups, "A days" and "B days". All cast members will appear in the last two performances and the sayonara show.

Ludwig van Beethoven instigated a musical revolution of such historical proportions that we still know his name today. And yet the man bearing that name was visited by misfortune of all kinds: lost love, loneliness, hearing loss... Even so, he was able to produce his Ninth Symphony featuring the singing of "Ode to Joy." But how?

After the French Revolution, Europe was thrown into chaos.

In the early 19th century, at a theater in Vienna, the capital of the Austrian Empire, Ludwig has just conducted a concert and unveiled a new music masterpiece. The venue erupts in applause, and the curtain comes down in the midst of the elation, bringing the concert to a close. The Emperor of Austria and his entourage visit Ludwig in his dressing room. In the mind of the emperor, this most recently performed symphony inspires thoughts of a global conqueror. While those around Ludwig encourages him to dedicate this piece to the Austrian monarch, the composer bluntly states that the work, entitled "Heroic Symphony," is in fact dedicated to Napoleon Bonaparte. The great general and leader of France has been waging war with nearby countries, including Austria, which has adopted a strategy of intervention out of fear of a wave of revolution. Ludwig is infatuated with Napoleon, but to the royalty and aristocracies of neighboring states, he poses a grave threat. Metternich, one of the emperor's close confidantes, directs a deadly cold stare toward the free-minded Ludwig.

Ludwig, a spirited musician overflowing with confidence, has been courting the lovely Countess Giulietta. He invites her to a theater for a performance of "The Sorrows of Young Werther," the novel by Goethe, whom Ludwig holds in high esteem. He plans to introduce his romantic interest to a good friend, the physician Gerhard, who has come from his hometown of Bonn, and his wife Lorchen, but Giulietta fails to arrive. The truth is that she has betrayed Ludwig, instead agreeing to become engaged to an aristocrat at the recommendation of her parents. Giulietta offers words of farewell to Ludwig. However, they never reach him, as he is beginning to lose his hearing. A mysterious woman appears before Ludwig who utters, "She said farewell." The woman speaks in a voice that is incomprehensible to all but him. Desperate to escape from the phantasm, Ludwig's mind is suddenly assaulted by terrible childhood memories.


Silk Road: A Bandit and a Jewel

From west to east, from east to west, the Silk Road, a trade route carrying culture, civilization, and people, connected Western Europe with Asia over land and sea.
A bandit preying on merchants traveling the route obtains a blue diamond. However, it is in fact the lost eye of the Indian goddess Sita. The jewel has changed hands on countless occasions, at times bringing good fortune to its owner, at other times tragic doom. Having roamed the Silk Road since the long distant past, the Eye of Sita invites the bandit on a journey through the copious memories dwelling behind its dazzling facets.

From the past to the future, and from the future to the past, this thoroughly exotic Revue Arabesque spins a tale of a journey through space and time.
This production is also the debut Grand Theater revue show for director Ikuta Hirokazu.

The music is composed by Kanno Youko, who has worked on music for numerous commercials, anime works, and films, and has also written music for a variety of artists. Audiences will be treated to a harmony delivered by the combination of her creative world of music plus Nozomi Fuuto and the Snow troupe!