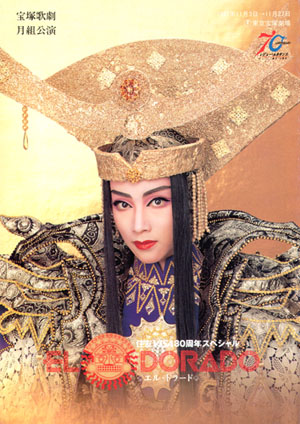 Act I ~ Shadow casted on the coast of the sun

The ancient city of Granada in Andalucia, Spain, in the beginning of 1530.

People such as Arabs and gypsies, oppressed by the Spanish conquerors, were living in this land which had been taken over by Spain at the end of the 15th century. However, there were some Spanish who were impartial to these conquered people. Colonel Ignacio de Lucia of the invincible armada was one of them. He associated freely with Rodrigo, the head of the gypsies, and his daughter Laula, and his Arab servant Kasim.

One day a reception party was held at the Alhambra on the top of the hill of Granada to welcome Lord Mendosa who had just become governor of Nueva Espana. Ignacio welcomed him with a dance show of gypsies. But lord Mendosa and his staff all plainly showed their disgust of the gypsies. Ignacio believed that people like Arabs and gypsies should be accpeted as his brothers and their talent should be respected. On the other hand, Lord Mendosa humiliated Indios by exposing them to the public view.

Ignacio and Mendosa became absolutely hostile to each other. However, Mendosa's position was powerful enough to take the teeth out of Ignacio's position.

Ignacio and Laula tried to rescue Urbamba, one of the ladies humiliated by Lord Mendosa, but Laula got caught by Amerigo, Mendosa's son. When Laula tried to run to Ignacio for help she accidentally hurt Amerigo, who tried to slay her. Ignacio killed Amerigo with his sword while trying to protect Laula. Having deprived Amerigo of his life, Ignacio suffered from guilt. Rodrigo and Laula, who was secretly in love with Ignacio, tried to console him.

Ignacio was then pursued as a criminal, for Lord Mendosa was furious over the death of his son. He attacked Ignacio's family and executed them. Ignacio was overcome with sorrow and thought about turning himself over to Lord Mendosa. Rodrigo and Lieutenant Diego pursuaded him to escape from Spain and live with them. Urbamba told them about El Dorado, an utopia with no fighting and no hatred.

Ignacio and his comrades embark on a ship at the port of Malaga, with a fake command paper made by Diego. Don Ricardo, the greedy captain of the ship, and the sailors Fernando and Torres were on the same ship. They were all heading for El Dorado, but for different purposes. Everyone was as quiet as if they were actors waiting for the rise of the curtain.

Two months later, they barely drifted ashore on the new continent. It was covered with dense forests. Still lead by the melancholy of Urbamba's flute, Ignacio finally reached the entrance of El Dorado. Ignacio ran into an Indio girl, Renia. He smiled softly at her, but she was too frightened. Renia was an Aculla (a maiden who devotes herself to the God of the Sun), who was destined to serve the God of the Sun.She was forbidden to talk to or even see men. Because of this rule she couldn't answer Ignacio who tried to talk to her. They both grew frustrated.After a while Renia disappeared. Ignacio was completely carried away by her. He ran after her and as a result stepped into El Dorado.

The empire was covered with gold and it was ruled by the emperor Huallpa, self-claimed "child of the sun." Huallpa ordered his people to worship the sun. He had 5000 wives. Because Ignacio had served Urbamba he was welcomed as a guest. There he found Renia among the Aculla and realized he was in an unacceptable love.

Ignacio went into the Aculla's mansion to see Renia again, knowing that if he was found out he would be killed. Renia broke the rule and responded to Ignacio's love. Singing and dancing, they engraved their feelings in their minds. However, Huallpa found them and ordered Ignacio out of El Dorado.


Act II ~ Love devoted to the god of the sun

Ignacio and his friend's ship anchored at a port in north-east South America. Ignacio could not get Renia out of his mind. And Laula, looking at him, accepted the end of her love toward him. She made him realize how much he loved Renia and he made up his mind to return to El Dorado. Meanwhile, Ricardo found out about the existence of El Dorado and followed Ignacio to attack the empire. The gypsies, Rodrigo and Laula, also tried to catch up with Ignacio, but soldiers of the empire captured them. Huallpa reluctantly gave orders to execute Ignacio.

Ignacio and Renia met again and were reassured of their love for each other. Although they were captured they feel contented, and their hearts are filled with love.

Huallpa was upset with the fact that they hadn't followed the law. Ignacio preached to him that love was much more precious than laws and the child of God, too, must possess emotions. Huallpa began to feel deeply attached to Laula and embraced her tenderly. In the meantime, Ricardo and his troops start their attack on the empire. Struggling against their iron weapons, Huallpa and his army capture Ricardo who had fallen for a trick of Laula's. Huallpa made peace with Ignacio and released his wives. Moreover he declared that any laws that would obstruct love no longer existed in his empire.

Nevertheless, the joy didn't last long. Diego, Mendosa's spy, confided to Huallpa that the Spanish forces would make an attack on them at dawn. The lovers spent their last moments together preparing for the attack.

The day broke and the Spanish forces began the attack. People were slaughtered. Huallpa, too, was killed when he tried to protect Laula.

El Dorado lost the child of the God. The empire was just about to collapse. Facing the enormous strength of Spain there was no way El Dorado could resist the assault.