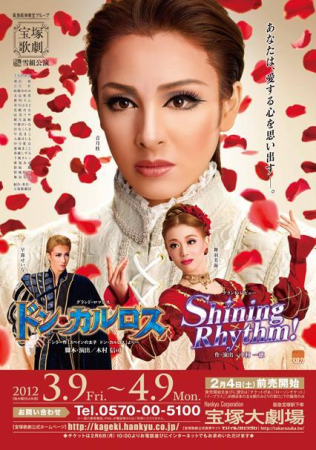 From the official web site, with some small changes.

It's the late 16th century. Spanish Prince Don Carlos is adored by the court and his people. As a royal heir, he is expected to carry the Kingdom's future on his shoulders. One day, Carlos goes to a forest for some quiet contemplation.

Queen Isabel appears before him, accompanied by her lady-in-waiting, Leonore. Isabel was once Carlos' fiancée. However, the countries behind the arrangement had a change of plan, and so instead she ended up marrying his father, Philip II. If anyone familiar with this course of events were now to spot the pair talking to each other, they would surely come to a one, mistaken conclusion: that it was a tryst. Carlos is worried about such an eventuality, but Isabel starts to speak. She has a secret that can only be conveyed while the two are alone. Yet just at that moment, the couple are surrounded by retainers who have been in search of them. Isabel's words are cut short.

That evening, Carlos has an audience with Philip II. He is unable to open up to his father, as he was raised in the absence of his parents from a very young age. When asked whether he and Isabel had a clandestine meeting, he struggles for an answer. Carlos' behavior fills Philip II with suspicion over the nature of the pair's relationship. The King secretly summons the Marquis of Posa, a good friend of Carlos and one of his best retainers, and orders him to find out what the pair are up to.

Carlos, who is close friends with many young aristocrats, becomes involved in a debate one evening with a group of young people over the future of Spain. The Marquis of Posa, having just returned from a trip to observe conditions in the Netherlands, starts to talk about the awful oppression he witnessed there of Protestants. As the storm of religious reform blows across Europe, the oppression by Philip II of the Dutch Protestants grows harsher by the day. How is it that religion, which is supposed to guide people toward happiness, is ending up causing so many deaths? Many of the young people concur with the Marquis, and they appeal to Carlos to petition Philip II, requesting that the King curb the brutal anti-Protestant oppression. Carlos listens solemnly to his friends' arguments, but he answers that as long as he is prince, he is in no position to take any immediate action.

After retiring to his room, Carlos thinks of ways of doing something for the people of the Netherlands, as well as for his friends who are so alarmed over their plight. Leonore then arrives carrying a secret letter written by Isabel, saying she wants to speak with him one more time. Carlos and Leonore are childhood friends, as they were raised together at the home of his aunt, Joana. Carlos' heart skips a beat at the visit by Leonore, as he has been secretly in love with her. Leonore too has concealed her feelings for him, yet she full appreciates her position as a lady-in-waiting, and has never spoken of her feelings. Carlos, who has come to terms with the fact that more than anything else, he is heir to the throne of the Habsburg Family, entrusts Leonore with his reply for Isabel. Yet behind his back, the Marquis of Posa discovers what the couple are up to.

Light, shadow, excitement, joy - along with passion and dynamic movement! The stars of Snow Troupe, dancers and singers move with scintillating rhythms, and sparkle with power and enchantment in this magical dancing show!