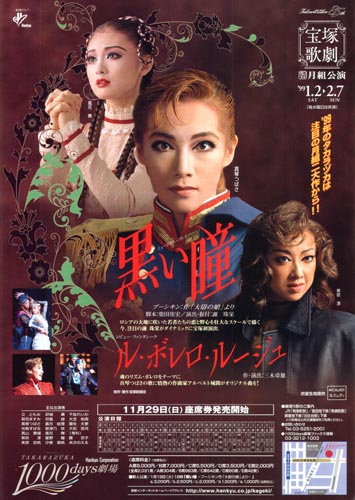 Nicolai's (Makoto Tsubasa) father buys him a position in a regiment out in the wilds of Russia, because his father believes he needs to build some character. On the way he gets caught out in a snowstorm with his servant and they can't see the road for the snow. A ragged Cossack comes stumbling upon them, and shows them the way to the nearest town. Nikolai's servant won't let him pay the man, so he gives him his nice fur coat. The man promises not to forget his kindness. Nicolai continues on to the Belogorsky fortress. There he falls in love with the captain's daughter, nicknamed Masha. His rival is the cynic Shvabrin, who sees no good in anyone and was exiled to the fort for killing a man in a duel. Masha won't have anything to do with Shvabrin, so he starts saying slanderous things about her. Nicolai challenges him to a duel, and gets wounded. Masha nurses him back to health and the two admit their love, but Masha says his parents will never accept her, because she doesn't even know who her true parents are.

Chapter 1 Sapateart Noir (Scenes 1-3)
Sapateart dances alone as if offering a prayer in the mirror. Suddenly the world of Spain unfolds.


Chapter 3 Blue Rose (Scenes 7-9)
In New York. A man looks back and thinks of the girl who deserted him. She left him the blues, which reminds him of her sigh of grief. Lady Blues appears. Feeling depressed, the man spends his remaining time dancing with her.


Chapter 5 Blue Mosque (Scenes 15-17)
In the labyrinth of gold and mosaic, a young knight from the West saves a princess of the Orient. She was locked in a mural.


Chapter 6 Gypsy in Black (Scenes 18-20)
Men in black tailcoats dance with the tunes of gypsy, mambo, and rock 'n roll.