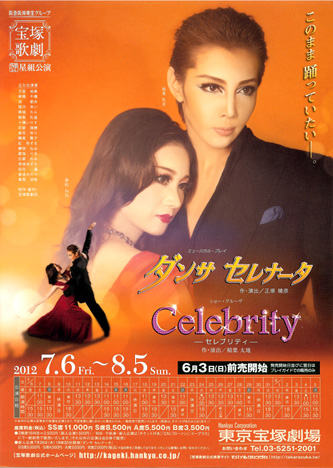 (From the Official Web Site)

A man appears inside a nightclub that is abandoned and slated for demolition. His name is Isaque. He was once the top dancer while he performed in a show at the club. A sparkling stage, the music, the hustle and bustle of the customers — every day, he keeps the memories alive in his heart, of a time when he totally devoted himself to his dancing.

Rewind to a dance performance, built around Isaque and his fellow performers, as it unfolds on the stage of the Lua Azul nightclub. The show is terminated just as it enjoys great success. Reviews from the club patrons had never been better. But Isaque still isn't satisfied. He speaks with his partner Angelita, who has become irritated by his countless demands to make changes in the dance steps, and she doesn't pay much attention to him. Jose, a bartender, is worried about Angelita for her somewhat casual attitude.

Isaque has been beckoned by Luis, one of his fellow dancers, and so he visits their rendezvous, a tavern. There, Luis introduces him to his girlfriend Carolina, the daughter of an aristocratic family. The couple come from different social classes, and Luis confides that they may elope so that they can fulfill their love. After the couple head home, Isaque is left by himself. Angelo and Monica, siblings who were born in a colony, become entangled with a drunken soldier in the tavern, and Isaque comes to their aid. Spotting the scene, Joaquin, a member of the National Defense Police (the secret police), speaks to Isaque to give him some background of the situation. The soldiers are unruly, he says, due to the growing intensity of the movement pushing for the colony's independence, and that the current government, which has long ruled as a dictatorship, is already on the verge of collapse. However, Isaque shows no interest in these events and responds that he only wants to be allowed to live in a way that he himself finds acceptable.

An audition for dancers takes place at the club several days later. Monica arrives with her friend Rita, who is taking the audition. As Rita is slow to learn things, Monica dances with her while teaching her the steps. Noticing this, Isaque detects Monica's gift and invites her to become a dancer. Monica agrees, but only under the condition that Rita come with her.

Around the same time, Angelo secretly meets with members of anti-government movements bent on revolution. Even though he was arrested in the past for leading the independence movement for his native country, which has been colonized, Angelo has managed to escape from jail with the help of his army friends who oppose the government. He explains in the meetings that if all the different anti-government movements everywhere were to unite, and if there were to be a revolt by his friends in the army, then the revolution would succeed with minimal casualties. Angelo starts organizing the local anti-government movements, which are scattered everywhere. However, Joaquin has been secretly monitoring Angelo's gatherings, and in short order he is detained by the secret police. Having gotten wind of the identities of the leading members of the anti-government movement, Joaquin is about to question Angelo about his army friends.

Angelita ponders whether Isaque will replace her by Monica. Meanwhile, Angelita takes a tumble in the middle of a show and is injured, and so Monica dances in her place. This makes Isaque only more convinced that he wants to continue dancing with Monica for as long as possible, as her performances provide him with a sense of excitement he has never witnessed before on a stage. However, she tells him she is praying for the independence of her fatherland and, at any rate, she intends to return there. Isaque suddenly kisses her and then tries to restrain her. But in no matter of time, Monica is taken to the secret police.