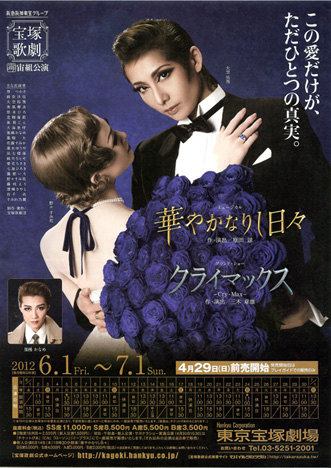 Symbolic of the era, termed the "Roaring Twenties," a party is being held one evening at an elegant home in the well-heeled Upper East Side of Manhattan, attended by socialites. The man who lives here is named Alexandre Volskii. Purporting to be a scion of Russian nobility, this young businessman has amassed a huge fortune.

Just as the party hits its peak, a gunshot rings out. The pistol is in the hand of an intruder. Everyone is in a commotion. However, the man is subdued by Arthur Sheldon, a detective of the New York City Police Department, who has rushed to the scene.

Around the same time, a revue, the "Ziegfeld Follies," led by the impresario Florenz Ziegfeld, is a sensation on Broadway. The productions, which attract beautiful women from around the country and enchant audiences with their spectacle, are staged every year at the New Amsterdam Theater on 42nd Street, and leave the crowds wildly enthusiastic. Florenz holds auditions in a bid to discover new talent. Judy Lane comes to the venue, with dreams of becoming a Follies star. However, she is annoyed by the high-handed behavior of the leading star, Anna Held, and she storms out of the venue.

Florenz and his manager Peter have been struggling to keep the theater running. As a result of their attempts to create the kind of flamboyant scenery audiences crave, their finances are totally out of line. But then Alexandre proposes to Florenz that he provide a large amount of financing for a new show. Florenz, who has long been in a quandary, jumps at the idea.

The credentials stating "scion of Russian nobility" - in which an impresario of uncommon ability has staked a great deal of faith - are really a fabricated history concocted by Alexandre. Alexandre Volskii - or Ronaldo Phillips - came to America with his parents when he was 5. Yet he found himself mourning their deaths not long afterward. With no family members left, he took on various jobs just to survive, becoming an ingenious con man in the process.

His contract with Florenz carries a condition that holds the New Amsterdam Theater as collateral. Should the show fail, the collateral - namely, the theater - will become the possession of Ronaldo. It has been Ronaldo's dream to make this theater his own, because as an impoverished youth, he sold newspapers at a spot beside the building.

Together with his confidant and subordinate Nick, Ronaldo conspires to make Florenz's show fail. To begin with, he plots to entice Anna to go the Winter Garden Theater, a rival venue of Florenz's. The plan is a stunning success. Ronaldo and Nick head to their favorite drinking hole to raise a glass or two in celebration. Just then, a new and unknown singer becomes embroiled with Grant, the club heavy, and his entourage. Ronaldo lashes out and punches the men, and then ushers the woman outside. She happens to be Judy, who reveals the circumstances by which she had come to work at the club. In her eyes, he detects the same kind of hidden fighting spirit that he once had. Ronaldo starts to develop an interest in the girl.

"A series of climaxes is perfect for a show." Imbued with such thinking, this performance unfolds with rich variety, elevating the varied charm of Oozora Yuuhi to the max. The glittery show suitably embellishes Oozora's last performance, a sweeping montage of her male roles.