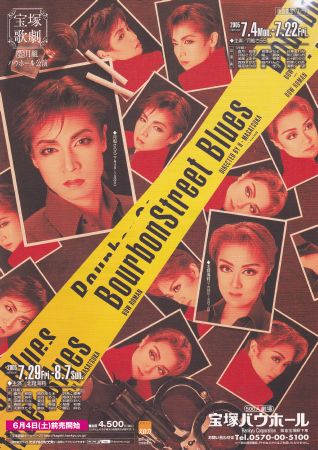 Jeff has always gotten into fights, and his girlfriend, Cynthia, is always telling him to stop before it's too late. A local detective, Gerald, also keeps an eye on him and tries to talk him out of his fighting habits. After his latest brawl with some disrespectful customers in the cafe he works in, Cynthia tells him that they should break up because as long as they're going out he'll keep up his bad habits. He coaxes her to go dancing, brnging along his friend Smile. After the dance they have a heartfelt talk, and she admits she wasn't intending to break up with him — she wants to be with him too badly. He promises to straighten up his act, but she tells him it doesn't matter ... she'll still be with him always.

Smile goes home to fighting parents, and decides to stay outside for a while. There the ruffians who had tangled with Jess earlier see him and recognize him as Jeff's friend. They drag him off to get info from him and the next day one shows up at the cafe to tell Jeff they have his friend. Jeff tries to play it as if he has no friends, but in the end goes to rescue Smile anyway. There the boss confronts him and tells him they'll go after the shop and his girl if he doesn't join them. Furious, Jeff agrees to be the boss's driver. He bargains, however, for the shop's safety. He then quits his old job, leaving the owner confused and bewildered. He tells Cynthia he has a new job, but doesn't exactly give her the details...

While driving the boss one day, he drops them off and is told to wait with the engine running. There's gun shots and an underling runs out and tells him to run away, but Jeff insists on waiting for the boss. The boss stagers out, dying. He gives Jeff a key with instructions to give it to give it to Vanessa. Vanessa takes the key and discovers a case filled with diamonds. While they are admiring the jewels two men with guns approach them and take the case from a trembling Vanessa. Jeff goes after them and beats them down and grabs the case, but a terrified Vanessa refuses to take it back.

Jeff is slightly worried, but determined to turn this to his advantage somehow. He takes Cynthia for a drive and gives her one of the diamonds. She eventually gets the whole story out of him, and insists he give the diamonds to the police. After a long time, he agrees. Gerald tells Jeff that this time he has tangled with the wrong group, and that this mafia family has connections everywhere and won't be shy about killing him. He'll have to go into hiding and take on a new identity. No more contact with everyone he knows. Jeff tells Cynthia that he won't be able to see her for a long time, but promises that he'll call.

Meanwhile, Ferty's two underlings have been taken in by the new mafia family in order to track down the diamonds. They go and find Smile, who is with Cynthia. They take Cynthia and tell Smile to deliver a message to Jeff to return the diamonds... or else.

Jeff and Smile arrange his escape from his "protection", but Gerald manages to track Jeff down. He confronts him, and Jeff draws a gun, swearing he'll shoot. Gerald tells him to shoot, but Jeff can't. A furious Gerald asks him what he intends to do alone against the entire mafia, and gets Jeff to promise to wait until Gerald returns before doing anything.

Elsewhere, Cynthia is rather worried to hear that she'll be killed if the diamonds aren't returned, since she knows the police have them already. The mafia sings a song about the joys of being evil, and then leaves for the meeting to get the diamonds back. The two lackies are left with Cynthia. Jeff shows up with the diamonds (And here I'm confused, was this on Gerald's OK, or did he set off on his own?) and gives them to the lackies, warning them that the family intends to kill them anyway once they get the diamonds back. "Take them and go!" he tells them, and grabs Cynthia's hand to take her away. But the head mafia guy, Rossi, returns on a hunch and finds them. He shoots one of the lackies in the leg, and takes the diamonds. Then he orders Jeff to come towards him and turn around, intending to shoot the boy in the back. Suddenly the cavalry arrives, and Gerald shoots Rossi instead, sending him to the floor. He then turns to call an ambulance, and the downed Robert recovers his gun and shoots Gerald. A furious Jeff pummels Rossi into unconsciousness and then rushes to Gerald's side.

"This is the second time.. I've been shot," Gerald complains, before falling unconscious.

At the hospital while they wait for news, Jeff and Cynthia talk. Jeff admits that he's gotten into a mechanics school and that his dream is to be a mechanic for NASCAR. He has finally gained confidence that he's not worthless and can actually do something with his life. A nurse bustles through and tells them that Gerald is going to be fine. Later, Gerald tells Jeff that the entire mafia family has been taken care of and he can life without fear now. A rather nervous Jeff asks Gerald why he took so much interest in him, and Gerald replies that if his son were still alive he'd be about Jeff's age.