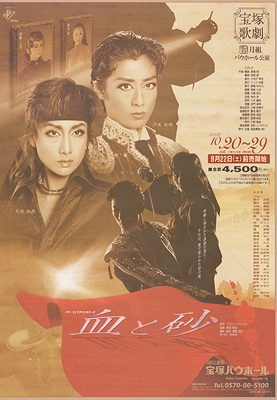 As children, Juan and Plumitas dream of becoming bullfighters. But one day when they go to the ring, they are offered a chance to fight the bulls and become candidates. Juan freezes, and it is their friend Chiripa who jumps into the ring. Chiripa is killed, and then Juan unfreezes and draws off the bulls. He is hailed as having great potential and is recruited. Plumitas can't believe Juan would do this when Chiripa has been killed, and the two brothers become estranged.

While Juan becomes a new matador legend, Plumitas asks his sweetheart to marry him and moves with her to the city to start a new life. But Lucia is killed, run over by a thoughtless noble. Plumitas swears revenge and becomes "El Alcon", the thief and assassin.

Meanwhile, although married to his childhood sweatheart, Juan becomes ensnared by Donna Sol. He becomes completely obsessed with her. Jealous of his usurped matador position, Pescadero hires Plumitas to kill Juan. Plumitas finds this darkly humorous. While following Juan he finds out about Donna Sol. Donna Sol, meanwhile, has found a new, younger matador and dumps Juan. This drives Juan more than slightly crazy.

Plumitas visits Carmen and tells her about Juan's lover. He attempts to seduce her, but Carmen's sweetness prevents him. Carmen leaves Juan, and joins a nunnery.

Eventually, Juan and Plumitas reconcile. Juan is killed by a bull in the ring, egged on by Donna Sol. Plumitas is trapped by the police and shot, falling next to his brother in the sand.