Loading...
Welcome to Takarazuka / A Farce in Pigalle
READ THIS BEFORE EDITING THIS PAGE 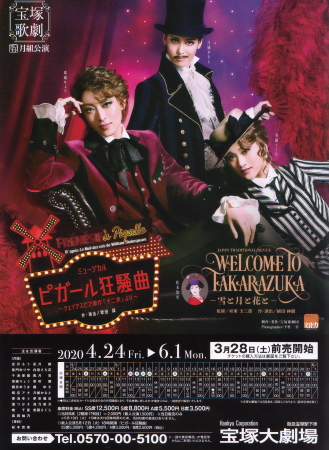 A Farce in Pigalle:

Due to COVID-19 concerns, the number of actresses on stage at a time has been reduced. The younger cast members will be split into two groups, "A days" and "B days".


※ The Hatsubutaisei assigned to Moon Troupe from Class 106 will appear in all performances in Takarazuka (with the rest of their class) before switching to an A/B cast schedule for Tokyo performances.
† From the 1:30PM performance on 12/17 to the final performance on 1/3/21, Nanano Ari and Saaya Ichigo will be appearing as substitutes for Maya Yutaka.

The spirituality of the Japanese people is based on the beauty of the seasons. The theme for this Takarazuka revue show comes from the beauty of those four seasons. Takarazuka Revue traditions of combining Western music with Japanese dance is one of its charms, and here we use beloved, well-known songs to spread that charm to even more people. Kabuki legend Bando Tamasaburo will be supervising director of this show, his first collaboration with the Takarazuka Revue.

The year is 1900. The city, Paris. This era will come to be known nostalgically as the Belle Époque, and with the Paris Exposition drawing a massive crowd, people are excited about the arrival of the new century. The Moulin Rouge, a red windmill at the foot of Montmartre, is a symbol of this era. It is known as the top music hall in Paris, but with the novel revue theatres drawing away the customers, the Moulin Rouge is falling on hard times. The impresario Charles Zidler plans to revitalize the hall by casting a particular woman as the lead in the new revue. Her name: Gabrielle Colette. Gabrielle, the wife of the popular writer Henry Gauthier-Villars (Willy), possesses incredible beauty that makes one feel it to be a terrible waste for her to remain the wife of one writer, and is considered as the model of Willy’s most famous work Claudine. If such a woman could be convinced to appear at the Moulin Rouge, it would be the talk of Paris and draw throngs, but how could she possibly be persuaded?

Just when Charles is wrestling with this problem, a young man comes to visit the Moulin Rouge. This man calls himself “Jacques Valette,” and begs to be allowed to work at this dreamlike place. Charles orders Jacques, who says he is prepared to do anything, to go and persuade Gabrielle, and promises to hire him as a secretary if he can accomplish this. Jacques heads straight to Gabrielle, but in truth ... he has a secret. He ... is a woman! His real name is Jeanne, and he hides his true identity and dresses in drag for a particular reason.

Unaware of this, Gabrielle, upon Jacques’s visit, falls in love with him at first sight. Willy’s novels are actually all written by Gabrielle, and, tired of being used when it is convenient, she is living apart from her husband. Jacques, who has a freshness totally removed from the men of the streets and a certain mysterious, “neutral” charm, is incredibly attractive to Gabrielle, and Gabrielle, who is smitten, agrees to appear on stage on one condition: that Jacques play opposite her. She also insists that she wants to try a duet dance that passionately expresses the love of a man and a woman. Jacques, afraid of being found out as a woman, categorically refuses, but overcome by Charles’s urgency, he concedes, as long as he can wear a mask and only their hands touch.

Rehearsals begin, and day after day Gabrielle nurses the torch she carries for Jacques. Jacques, on the other hand, loves the Moulin Rouge with all his heart, and starts to find himself falling for Charles, who talks to him of his dreams like a starry-eyed youth, and is finally unable to keep his nature as a woman a secret.

It is the opening night of the latest revue, La Vie Parisienne. Just as Charles had planned, a crowd forms in the theatre. Among the crowd is a man who bears an uncanny resemblance to Jacques. He is Victor Ballenberg, the heir to a prestigious Belgian noble family who has traveled to Paris because he believes it to be where he can find his paternal half-sister. Victor is entranced by Gabrielle’s great beauty, and fixes his gaze on the stage. But then an unforeseen incident occurs just at the height of the performance...! With Jacques and Gabrielle, and now Victor as well, being drawn in, the whole world of the Moulin Rouge is about to be turned on its head! But how is this story to end...!?