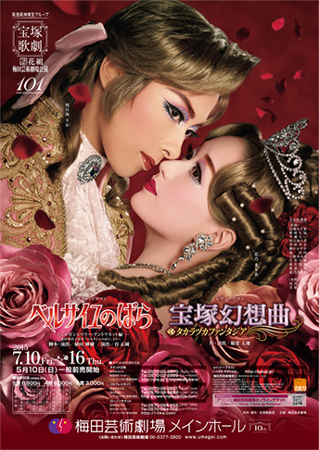 The Rose of Versailles:

The Rose of Versailles: Fersen and Marie-Antoinette

The confrontation between the aristocrats and the Third Estate is intensifying at the Estates General. Bastille Day is drawing near. Oscar applies for the transfer to the post of captain of the French Guards (later absorbed by the National Guards) in Paris with the determination to serve the nation. Those close to Oscar dissuade her in vain. On the night before going to Paris, she repays Andre's love by accepting him. On July the 14th in 1789, in front of the Bastille, Oscar decides to fight against the royal army, joining her troop with the Parisian rioters, and, in the course of fighting, both Oscar and Andre are shot dead.

In Sweden, remote from the French upheavals, Colonel Gerodelle who served under Oscar visits incognito Fersen. He tells him that Oscar and Andre were killed and that the king and his family are now in danger. Alarmed, Fersen resolves to return to France with Gerodelle to rescue the French Royal Family. However, it is difficult for Fersen to go outside the country since he is under close surveillance of the Swedish government. He hits upon a plan to evade the vigilance by making profit of the festive stir on the king's birthday. During the birthday banquet, Fersen confides to King Gustavus III his love for Marie-Antoinette and his determination to deliver her and her family. Then, he breaks through the soldiers trying to stop him and sets forth towards France in a hurry.

Refinement with grace. Boldness with passion. A fantasia woven together by a reborn Flower Troupe led by Rio Asumi. This Revue Roman unfolds with a beat that is at times classical and at times contemporary, embedded with tradition spun from the Takarazuka Revue’s 100 years of history with time-honored Japanese beauty.

† Due to a typhoon in Taiwan, the opening performance on August 8th was cancelled, replaced with a show on August 10th.