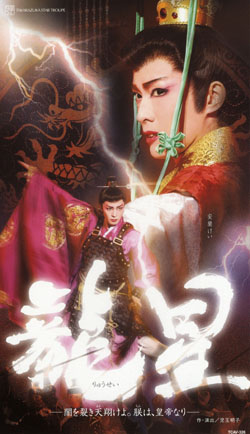 In medieval China, a war rages between the western and northern people. The only son of the emperor in the west is very sickly, so when a concubine gives birth to a healthy boy, everyone is delighted - except for the empress, who sees a rival to her own son in the heroically named "Ryuusei" (Dragon Star, named for a falling star the emperor spotted during the eclipse at the time of his birth). She tries to have the baby assassinated, but his mother saves him at the last moment, at the cost of her own life, though the baby is injured during the attack. To protect the prince, the wife of the prime minister comes up with a plan: she gives her own son a matching injury, and the babies are switched, with none but herself and her husband knowing the truth. Once again the empress plots to be rid of Ryuusei, this time arranging for him to be captured by Uen, the leader of the Northern people. But Uen replaces the prince with an imposter, a young war orphan whom he expects to act as his spy.

But when the emperor dies, and "Ryuusei" is summoned to the imperial court, the young man finds his allegiances torn, particularly when he meets the beautiful Sari, a foreign princess held hostage by the emperor, who both hates and is drawn to him... Meanwhile, the prime minister's son Muei, ill-used by the new emperor, has traveled to the North and joined Uen and his people, where he shares a romance with the fierce young warrior Karen.

Ryuusei learns from Prime Minister Ri that the babies were switched, but Ri discovers that Ryuusei is an imposter when he sees that his arm is un-scarred. He draws a sword on Ryuusei, demanding to know who he is. While Ryuusei tries to defend himself and get the sword away from Ri, the prime minister is accidentally killed. With his dying breath, he begs Ryuusei to find the real prince and make him emperor. No sooner has Ri died, than news comes that the sickly emperor has died: Ryuusei is now the new emperor.

The new emperor shocks Uen by continuing his war campaign against them - clearly, the "spy" has switched sides. Ryuusei and Sari's relationship continues to be rocky, though secretly everyday he sends her the white flowers of her homeland. When Sari learns from her maid that it is Ryuusei that has been sending her the flowers she loves, she has a change of heart.

Uen's army is defeated, and he confesses to Muei that he has replaced the prince with an imposter. Muei and Karen go to find the prince where he is still being kept prisoner, only to find the man at death's door. But then the captive confesses to Muei that he isn't Ryuusei either, but in fact the son of the Prime Minister, who was switched with the prince to protect him. Muei realizes that he is in fact the true Emperor!

Karen wants to go back to Western China with Muei, but he feels it is too dangerous for her. The two fight to see who will have their way, and though Karen is clearly desperate to succeed, Muei is the clear winner. Karen admits she is carrying his child, and Muei tells her he is the true emperor. "Well, if that's so, I guess that makes me the empress," she replies, not really believing him.

Muei goes to the imperial court to confront the imposter. After a fierce battle, he has the imposter at swordpoint and demands to know his real name. The imposter replies that he has no name - he was an orphan, and "Ryuusei" is the first name he was ever given. He begs Muei not to tell Sari who he really was, and Muei agrees, and is just about to strike him down, when Sari herself and the Head Guard run in. Although Ryuusei begs everyone to stay calm, Muei and the guard end up killing each other, and in the confusion Sari is also struck. She dies in Ryuusei's arms, still hoping they can together view the white flowers of her homeland. The grief-stricken Ryuusei finds a grim humor in the situation, as he once again takes the throne of China.

In another time and place, Karen gives a son his father's sword...