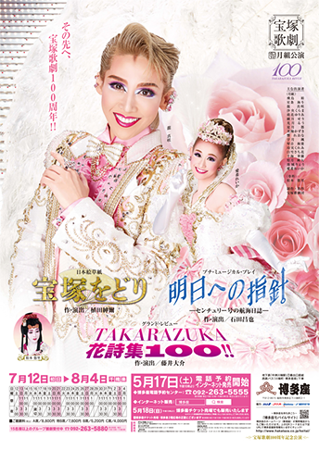 Guide to the Future

Amongst the traditional Japanese performances of the Takarazuka Revue, this is a work that not only succeeds to those traditions, but also challenges them. Celebratory dances, the origin of the traditional performance arts are in folk songs, which this new Japanese-style revue uses to create a new lion and butterfly dance (Kagami Jishi).

A Guide to the Future

The Century is an American passenger ship that has departed on its 100th milestone voyage. This is the story of the mere four days from the time the Century departs from a port in London to its arrival in New York.

Drinking alcohol is banned on the Century, as Prohibition Law is in force, as is the case throughout America. Even so, the ship proceeds smoothly on its voyage, carrying a large number of passengers and crew. It seems like a magnificent hotel gliding across the ocean with its swimming pool, restaurants and even gym.

Jake is the Century's Chief Communications Officer. He came into this position out of an aspiration to become a seafarer, which was triggered by an incident experienced in his youth. But now he has dreams of becoming a novelist, as his job of receiving the passengers' mail offers him a glimpse into human relationships. Jake, who always brings on the board the novel he is working on, titled “The Ship's Log,”encounters a mysterious girl one night on the deck. Meeting Jake for the first time, the girl starts a conversation with him in a friendly manner before completely disappearing, just like the fog.

Jake searches for her, and while scouting inside the ship he becomes acquainted with a woman on her way to New York to meet her husband. The woman is carrying a bouquet of flowers, and during a short conversation Jake learns that she plans to offer them to the soul of her younger sister who passed away on the Titanic 22 years earlier. He informs her that on the following day his ship will reach the nearest point on its route to the spot where the Titanic sunk. The woman, meanwhile, learns about the writings of Jake, the aspiring novelist who is holding “The Ship's Log,” and she becomes extremely interested. He offers to take care of her flowers until the following day, and as she hands them over, she grabs “The Ship's Log” away from him and leaves.

By the time she departs, Jake has received a shock by hearing a name she mentioned in response to one of his questions: Leila. For this is the name of the woman who was behind the incident in his youth that induced him to become a seafarer, and someone with whom he had been deeply involved.

The playwright and director Shirai Tetsuzou was called the "King of Revue." When he returned to Japan in 1930 he created Parisette, and following that, in 1933 he created Flower Poems. These were the genesis of the modern Takarazuka revue shows. For the 100th anniversary, we will present a new, modern arrangement of Flower Poems, with Takarazuka as its theme. The choreographer staff will include popular Broadway director and choreographer Jeff Calhoun.