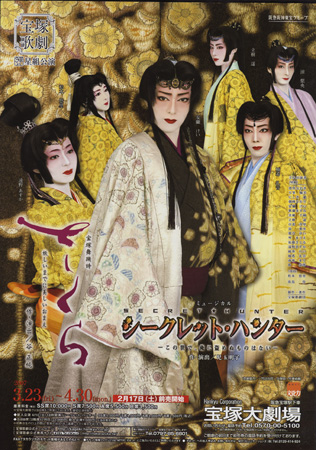 Scene 1-4: Prologue
A luxuriant overture rolls out. Then, the stage is lit up with a clang of wooden clappers. A galaxy of Young Men and Beauties of Cherry Blossoms are standing in line as if they were vying with full-blown cherry blossoms in splendor. They sing and dance centering around the Young Man of Cherry Blossom S.


Scenes 5-11: Dolls of Seasonal Festivals
The dolls of seasonal festivals are stored in a dark box-room after the festivals. The scenes comically represent the sentiments of such dolls.


Scenes 12-15: Bamboo Lanterns
In the course of lantern festival, a warrior of the defeated Heike clan rises from the dead and sings while dancing, cherishing the life he spent admiring the changing figures of cherry trees: a sad love story of the fleeing Heike warrior and Shirabyoshi, a medieval dancing courtesan who performs in white samurai's formal costume carrying a large white sword.


Scenes 17-20: Cherry Blossoms
The cherry blossoms that have bloomed and fallen unseen on remote mountains are carried away by the wind and meet the pale pink cherry blossoms. While traveling together, they find out that they have many friends. They sing and dance, intending to make the most of their brief but beautiful lives. The kimono costumes done in the Tsujigahana method of Ichiku Kubota enhance the magnificence of the scene.