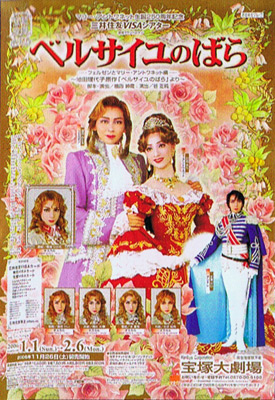 In 1770, Princess Marie-Antoinette of the House of Hapsburg, youngest daughter of Empress Maria Theresa of Austria, marries at the age of fourteen, Prince Louis (future Louis XVI) of the House of Bourbon, eldest grandson of King Louis XV of France. In anxiety over some childishness still lingering in Marie-Antoinette, Empress Maria Theresa sends over to France her confidant, Count of Mercy-Argenteau, on the mission to tutor Marie-Antoinette to grow up to be a beloved queen of the French people.
Marie-Antoinette fascinates the French court with her beauty and loveliness in only a short time. However, just as Empress Maria Theresa feared, she is too tender and indiscreet to perceive the shrewdness of the courtiers trying to gain her favor for their own interest. In addition, as she has a weakness for merriment and luxury, her free spending further helps to empty the kingdom's coffers already almost exhausted during the late king's days. The ever-rising taxes bear harder upon the people, who attribute the cause of their hardship to Marie-Antoinette and start vehemently hating her.

The confrontation between the aristocrats and the Third Estate is intensifying at the Estates General. Bastille Day is drawing near. Oscar applies for the transfer to the post of captain of the French Guards (later absorbed by the National Guards) in Paris with the determination to serve the nation. Those close to Oscar dissuade her in vain. On the night before going to Paris, she repays Andre's love by accepting him. On July the 14th in 1789, in front of the Bastille, Oscar decides to fight against the royal army, joining her troop with the Parisian rioters, and, in the course of fighting, both Oscar and Andre are shot dead.
In Sweden, remote from the French upheavals, Colonel Gelaudel who served under Oscar visits incognito Fersen. He tells him that Oscar and Andre were killed and that the king and his family are now in danger. Alarmed, Fersen resolves to return to France with Gelaudel to rescue the French Royal Family. However, it is difficult for Fersen to go outside the country since he is under close surveillance of the Swedish government. He hits upon a plan to evade the vigilance by making profit of the festive stir on the king's birthday. During the birthday banquet, Fersen confides to King Gustavus III his love for Marie-Antoinette and his determination to deliver her and her family. Then, he breaks through the soldiers trying to stop him and sets forth towards France in a hurry.