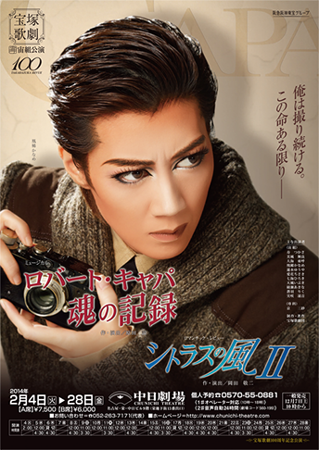 Before long Endre is becoming frustrated with his marketing efforts. Because his last name is common, people are pirating his work and not giving him credit — or money. Gerda suggests he try a "nom de plume" and they spend quite a while trying all sorts of different combinations, with the one suggesting a name only to have the other turn it down. Finally they agree on Robert, then Gerda plops down at the typewriter to hammer out a last name. Capra…"take out the 'r',"" says Endre... CAPA! They quickly formulate a bio for Robert Capa — he's a famous American photojournalist from New York. The name takes off, and the business starts being more profitable.

A dramatic musical portraying the life of a man who lived, loved and fought with single-minded purpose amidst the waves of an era of turmoil — searching for the true form of humanity.

While in the midst of the battle, Endre takes one of his most famous photographs, "The Falling Soldier." The battle was a losing one for the anti-fascists, and one of the young soldiers deliberately ran out and gave him the chance for the shot, despite Endre's protests that a photograph wasn't worth losing his life. Federico was determined that through the photo the world would learn of their position — and thus that it was worth the risk.

LIFE magazine asks that Capa come back to Paris for an interview. Endre, who by now is in love with Gerda, assumes she will come with him. She declines, hurting him. She explains that he needs someone to keep covering the events in Spain, and that she will always love him. He is somewhat comforted and finally proposes to her at the train station in Madrid. Gerda says "yes." They plan to live in Paris and raise their children there. Just as she is walking away he pulls what has become a classic trick — he raises his camera and calls her name. "Click."

Endre goes to call Gerda at the hotel in Madrid, to tell her all went well. He gets Henri on the line and asks for Gerda — will he pass over the phone? Henri, in tears, says he can't. Gerda can't come. She's dead. Endre doesn't believe him. Henri chokes out the story. As Gerda was going through the streets in Madrid, she was hit and killed by a tank.

Endre collapses, dropping the phone. All he has is a picture of Gerda - the only woman he ever loved — and she is gone, for good. In his despair, he almost smashes his camera, thinking there is no way he can keep going. At last he manages to remember her, when she told him she loved Endre Friedmann for who he was, not the fictitious Robert Capa. He decides his job is to keep going - and to keep taking photographs.

One of his last photos shows the soldiers walking across the field ahead of him.
.