Loading...
Ouranki / Dream Chaser
READ THIS BEFORE EDITING THIS PAGE 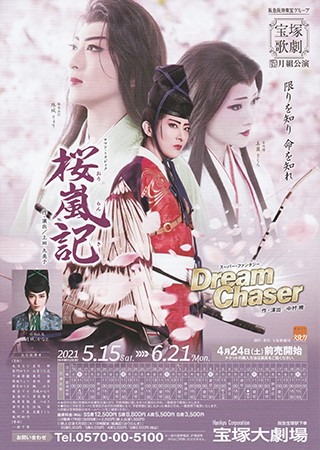 The story unfolds in the turbulent period in the history of Japan, where two imperial courts exist: the Northern Court set up in Kyoto by the military commander Ashikaga Takauji; and the Southern Court established in Yoshino by Emperor Go-Daigo after he fled from Kyoto. Kusunoki Masatsura, a warlord of the Southern Court, knows the court is approaching its downfall while spending his days fighting against the Northern Court along with his younger brothers: Masatoki and Masanori.

It all started back in the last days of the previous period ruled by the Kamakura shogunate. Kusunoki Masashige, the father of Masatsura, responded to Emperor Go-Daigo's call for raising an army; Masashige played an important role in the success of overthrowing the Kamakura shogunate to restore power to the emperor. However, samurai warriors from all over the country became increasingly disappointed with Emperor Go-Daigo's rule, and they rallied under the leadership of Ashikaga Takauji, a warlord from a branch family of the Minamoto clan. Eventually Takauji usurped control, drove Emperor Go-Daigo from Kyoto, and founded a new samurai government with himself at the head. Meanwhile, Emperor Go-Daigo, asserted the legitimacy of his imperial throne by claiming that Yoshino, where he had taken refuge, was the capital of Japan. It was the beginning of the battle over political power between two rival imperial factions: the Northern Court backed up by samurai families, which had seized Kyoto; and the Southern Court with court nobles, who had fled to Mt. Yoshino. The Northern Court had far superior military strength, and it was easy to predict the outcome of the battle. Emperor Go-Daigo died of illness shortly afterwards, while many supporters of the Southern Court gave up on the court. But Masashige kept fighting until the end of his life for the Southern Court, and his pursuit was carried out by his three sons: Masatsura, Masatoki, and Masanori.

Time has passed since then, it is now 1347. At the battle of Sumiyoshi-Abeno, Masatsura and his brothers are fighting well with a handful of soldiers against the large force led by Yamana and Hosokawa of the Northern Court. Masatsura goes out alone to scout the enemy's movement. On his way through a deserted mountain pass, Masatsura comes across a palanquin being attacked by minions of Ko no Moronao of the Northern Court. He fights off the attackers and rescues a lady-in-waiting of the Southern Court in the palanquin, whose court name is Ben no Naishi. The court lady is the daughter of Hino Toshimoto, who was executed for plotting to overthrow the Kamakura shogunate. Ben no Naishi yells at Masatsura for his action to save her, claiming she could imagine what the lecherous Moronao was up to by having his men abduct her, yet she deliberately intended to take him up on his scheme in order to kill him in his sleep. Seeing her strong hostility towards the samurai who killed her father, Masatsura made Ben no Naishi accompany his army to take her back to Yoshino. On the way back to Yoshino, Ben no Naishi is touched by Masatsura's rugged but noble character, and gradually becomes attracted to him.

Masatsura returns triumphantly with Ben no Naishi to the temporary palace deep in Mt. Yoshino, where he reports his army's victory to the Southern Court's nobles. Being aware of the significant difference in military strength between both sides, Masatsura urges them to make peace with the Northern Court. In contrast, the haughty court nobles are only interested in defeating the Northern Court to regain control of Kyoto. The compassionate Emperor Go-Murakami wants to avoid further sacrifices in his heart of hearts, but he chooses to keep fighting against the opposite court to fulfill the deceased Emperor Go-Daigo's last wish. The Southern Court's nobles insist that it is honorable for samurai to fight and die for the emperor. Masanori, who is the youngest of the Kusunoki brothers, takes his anger on Masatsura, demanding to know what they are fighting for. That is the question Masatsura is asking himself.

Emperor Go-Murakami suggests Masatsura take Ben no Naishi as his wife. However, precisely because of his love for her, Masatsura refuses, saying how he could promise a marriage when he would certainly die in battle.

The full-blown cherry blossom season arrives in Yoshino, while the decisive battle of Shijonawate is just around the corner. What is he fighting for? Amidst a storm of cherry blossoms, Masatsura follows the path he has chosen …

Based on glimpses of the military commander Kusunoki Masatsura found in the ancient writings of the "Taiheiki" and "Yoshino Gleanings."

"Dream Chaser" is one who chases their dreams. A passionate theme of single-minded dream chasing, wrapped up in the dreams created by Tamaki Ryou of Moon Troupe.