Loading...
Never Say Goodbye
READ THIS BEFORE EDITING THIS PAGE 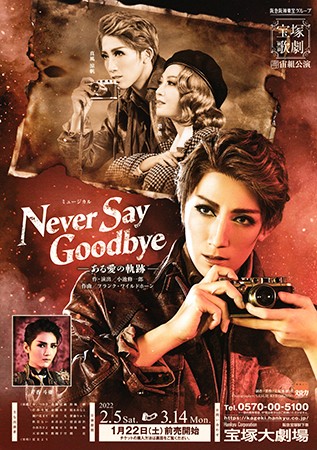 In the midst of the wilds of Catalonia, Spain, Peggy McGregor, who has come all the way from the United States of America, is looking for her grandfather's remains. She was told those remains had been buried under an olive tree.

Back in the year 1936 in Hollywood, at Club Coconut Groove where celebrities gather, there is an announcement about the production of a new film A Tempest in Spain. Ellen Parker and the real and active matador Vincent Romero are to respectively play the parts of Carmen and Escamillo, in addition to other actors. Katherine McGregor, the film's original author, rushes into the club during the course of the announcement. She has learned that the film's scenario is quite different from her original work and demands suspension of the production. However, Mark, the film's producer ignores her. Her violent loss of temper throws the club into an uproar. Then flashlights shine and a man appears. He is the one and only Georges Malraux who won great fame for his collection of photographs of Parisian manners and customs. Katherine draws close to him and asks him to give her the film. However, he refuses to do so, driving her into a fury. Before leaving, she tells him that she will never say goodbye to him unless he gives her the film.

That same night, Katherine boldly calls on Georges’ atelier in order to get the film. There she sees Georges’ unpublished photographic works of art and takes interest in them as well as in Georges himself. He tells her that he is a déraciné who was born in a poor town in Poland and ran away from home to see the wide world. He says that he has become a photographer in hopes of taking photographs that show the realities of life. He also says that her play A Tempest in Spain is based only on the stereotyped American way of looking at things. He advises her to observe things through her own eyes to really see what is real. Katherine answers that she is trying to find the realities of life like him but in her own way. She plans to visit Spain on the way to Moscow where she will attend the World Writers’ Conference. In the course of talking with Georges, Katherine feels respect for him, while he feels attracted to her sincerity.

Georges gets an entry visa as a special correspondent and goes to Spain accompanying Mark, Ellen and other staff who will hunt for locations there. At that time in Barcelona, Olimpíada Popular is being held in order to counter the Berlin Olympics sponsored by the Nazis. The American production staff including Georges watches its opening ceremony rehearsal. Ellen is impressed by its heated atmosphere, and asks Georges to take souvenir photographs of her with Vincent and the other matadors who will participate in the opening ceremony. However, Francisco Aguilar, Director of the ceremony and communications of the organization committee of Olimpíada Popular comes in and takes away Georges camera saying that photographs likely to compromise the purity of the workers' festival should not be published. Georges is violently against Aguilar. Katherine arrives accompanied by Komarov, an agent of the Ministry of Culture of the Soviet Union. Komarov is successful in persuading Aguilar to give the camera back to Georges. Katherine and Georges feel thrilled by their unexpected reunion. Then news arrive that the Spanish armed forces have risen in revolt in various parts of Spain following General Franco's insurrection in Morocco under Spanish rule. The rebel troops advance toward Barcelona, so that the Olimpíada Popular is forced to be cancelled. The rebel troops are backed by Germany and Italy. Aguilar urges the people to stand up to defend Barcelona against the fascists. Georges realizes that he is in the thick of an event that may change history and decides to remain in Spain.

The rebel troops come close and street battles begin throughout Barcelona. Georges runs around the streets with his camera and records history in the making. Katherine again meets Georges on the street and tells him that she will go with him in spite of the danger in order to see what he sees. Vincent joins the militia and fights alongside the foreign athletes who have decided to remain in Spain. After violent battles, the rebel troops end in retreat, and the people excite in their victory.

Vincent brings Georges and Katherine to the crypt of the Templo Expiatori de la Sagrada Família (Expiatory Temple of the Holy Family) where people are rejoicing over the victory. The foreign Olympians such as Max from the Netherlands and Bill from the United Kingdom are determined to fight against the fascists and organize a militia named Centuria Olimpíada. Ellen arrives at the crypt in search of Georges. When she sees Katherine accompanying Georges, she presses him asking if he still loves her. He replies that Katherine is the woman he has been looking for. Ellen gets angry and leaves. Georges then tells Katherine that it was his destiny to meet her, and together they can find the same things. He declares his deep love for her. The two promise to love each other forever, passionately kissing.

Georges enthusiastically photographs the Centuria Olimpíada drills which have just started. Katherine accepts Paolo's request to participate in an international broadcasting program of Radio Barcelona. The people of Barcelona who are determined to fight for freedom join the drills one after another. Aguilar abruptly shows up before them and declares that the militias should be organized under the direction of PSUC (Partido Socialista Unificado de Cataluña: United Socialist Party of Catalonia). Alfonso Rivera of POUM (Partido Obrero de Unificacion Marxista: Workers' Party of Marxist Unification) accuses Rivera of trying to put the militia under the Soviet Union's control. They are in sharp opposition. Vincent angered by their confrontation speaks once and for all that he and his friends have set themselves up to protect those they love and that in no way do they want to be involved in any political conflict. Georges stands up for Vincent saying that the enemy they should confront is the fascists. He continues that it is not the time for quarreling with each other as that would only break up the Republic.

Aguilar and Komarov, heading policemen, appear before the people celebrating the festival of San Jorge. Aguilar announces that from this moment on, PSUC rules the country along with the help of the Soviet Union, and will arrest all those who disagree. Aguilar asks Katherine to continue the international radio program, which is receiving great response overseas. Although Georges fears that she may be exploited by PSUC, Katherine tells him that letting the world know of the situation in Barcelona is the very task she has been looking for and parts from him.

The members of Centuria Olimpíada disappointed by the internal divisive quarrel that continues in Barcelona become less closely united. Georges aware of the situation tells them that they should not break up. However, Vincent asserts that Georges who sees things only through camera lenses should not say things that sound big. Hearing Vincent, Georges feels inspired. He sees the truth he has been searching for in the members of Centuria Olimpíada. They are voluntarily fighting at the risk of their lives without hesitation. He wishes to live a true life and decides to fight with them. They hear that rebel forces have attacked Guernica, a town in the northern part of Spain. They listen to the radio news broadcast by Katherine. However, in the course of the broadcasting, her voice stops. Georges feels that something has happened to her. He makes a plan to rescue her...