Loading...
My Love Lies Over the Mountains / Dance Romanesque 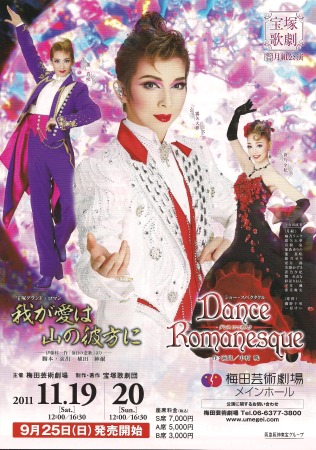 My Love Lies Over the Mountains

My Love Lies Over the Mountains

The 10th century. Boku Shuumin's fiancee Manhime is captured during a raid following a battle between the Goryeo people (of the modern-day Korean Peninsula) and the Jurchen people (of Manchuria). She is carried away to Jurchen. There the Jurchen commander, Chamuga, is unfailingly courteous to her. He swears to see her returned to Goryeo. However, because she has been captured, she no longer sees herself as worthy of Shuumin. After a long time has passed, Chamuga returns her to Goryeo at last as his forces attack. However, she feels alienated. She realizes that she is wife in spirit to Chamuga, even though he believes he must see her returned to Shuumin. On the battlefield, Shuumin and Chamuga are locked in combat. Chamuga is defeated, and tells Shuumin that Manhime has always thought of herself as his (Shuumin's wife) in an attempt to reconcile the two. However, Manhime arrives after Chamuga has died and follows him into death....

Energetic group dancing, dramatic story dancing and romantic duets: This show is composed of variety of dance scenes with the theme that dance can transform a moment into an eternity. The charm of the Moon Troupe, which brims with power, explodes on the stage.

A stage projecting the kaleidoscope of the world. Riding on a rock theme, the scene unfolds through solos, duets, and formation dances. Beginning quietly with the entrance of Romantic Man S, it explodes with energy through the otokoyaku formation dance and entire group numbers to the very end.

Leo and Millie, who have lost their way, enter an uninhabited mansion and fall asleep. When Leo comes to, he can't find Millie. Then the master of the mansion, Count Blood, appears and uses his magic stick to draw out and force imprisoned men and women to dance. Leo spots Millie amongst them and fights Count Blood to save her. At first he appears to have also become ensorcelled, but the talisman that Millie gave him when the chain broke protects him and he manages to defeat the count.

Quasimodo is the bellman of Notre Dame Cathedral. He sings that someday he will perhaps understand the reason he was born, despite his deformation. While Quasimodo watches the gypsy woman Esmeralda dance, Captain Phoebus appears. When Phoebus sees Quasimodo's beloved Esmeralda and wants to make her his possession. In order to save Esmeralda, Quasimodo fights Phoebus. Both men die in the sword fight, but Quasimodo ascends to heaven, freed at last from the defects of his birth.

A standard dance number with a Latin arrangement.

In search of some nameless thing that calls to them, Albin the seagull takes flight over oceans never before seen. Caught up in the desire for this thing, other seagulls join him, one by one, beginning with Ell. A terrible storm batters the seagulls. At the end of their strength, the seagulls no longer have the energy to take flight. But when Albin and Ell take heart and begin to fly, they are encouraged once more to join them in soaring across the sky.

The Finale Man appears and sings of the miracle of that instant of meeting, then the Finale Women appear and dance for that miracle of life and wonder.

Otokoyaku in tail-coats appear. They dance in formation to a bolero, with Bolero Man S at their center.