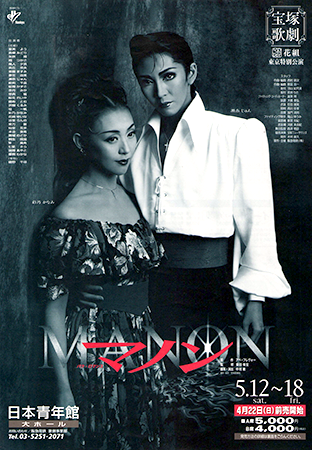 Available on DVD: Yes (release date 03/20/08)
DVD Scene/Music Cut: Yes
The dance scene "Duende" from Finale A has been cut.


WARNING!! MAY CONTAIN SPOILERS!!
Manon is loosely based on the Puccini opera "Manon Lescaut," but with several significant changes from the original storyline. It is set in Spain, not France, for one; and the plot has a few more twists and turns, and important characters.

The play opens with Roderigo arriving in port in Seville, and being welcomed by some singing and dancing girls and a bar hostess. He encounters his friend Miguel. From what we can gather, both Roderigo and Miguel are on their way to a monastery or church of some sort, to take vows and become priests. Miguel goes offstage for a moment, and Manon comes running in, calling for help.

Roderigo stands up, takes one look at Manon, and falls head over heels in love. He helps her hide from some men who are looking for her (we're not sure what they want.) When the coast seems clear, he brings her out, and they introduce themselves to one another shyly. Miguel returns, and so do the men who are looking for Manon. They grab her and begin to drag her away; she calls to Roderigo for help and he gets into a fight with the men. Manon asks him to run away with her to Madrid. Caught up in the heat of the moment and his infatuation with Manon, Roderigo agrees.

In Madrid, Manon is being pursued by Fernando, who sends her beautiful flowers and brings her an extravagant necklace as a gift. Manon flirts with Fernando but does not return his feelings, as she is impressed by his money but loves Roderigo. Fernando, however, tells Manon not to get too attached to Roderigo as Roderigo's father has already sent men to capture him and return him to Seville to take his vows and become a priest. Fernando disappears into a back room when Roderigo arrives. Roderigo declares his love for Manon and asks her to marry him. Manon loves Roderigo but is worried about what Fernando has told her, so she gives only a vague reply.

Roderigo's brother and a few other men suddenly burst into the apartment and grab Roderigo, hauling him away on his father's orders. Fernando reenters the room once they're gone and gloats. He tries to get Manon to accept his offer of courtship, and Manon plays along though her heart is not in it; she needs someone to take care of her financially and Fernando has money.

Back at home in Seville, Roderigo mopes around angrily. He argues with his mother and father, saying he loves Manon and nothing can deter him from that. Miguel enters and tells him Manon is to be married to Fernando. Roderigo can't believe it and wants to see for himself. He says something about how if it's true, he might as well be dead.

The city is having a great fiesta, and Manon and Fernando attend together. He puts an enormous engagement ring on her finger and kisses her, but Manon pulls away when she realizes Roderigo is there watching them. Roderigo calls to her, and she takes a few steps towards him. Fernando calls her back. Manon stands between them for a moment, but then makes her decision and runs to Roderigo. He holds her tightly for a moment in relief, while Fernando yells angrily. Manon turns around and throws the engagement ring on the ground. Fernando stalks off in fury. Roderigo is glad Manon chose him, but frustrated and angry that she would have considered giving herself to someone else. He and Manon have a long conversation (and we're guessing here, but I think it's at this point that Manon explains that her family is in financial trouble and if they don't find a way to get some money something bad will happen to them). Roderigo and Manon embrace sadly; they are in love, but Roderigo has no money as his family is furious that he defied them, and Manon has nothing but her beauty to try and make money for her family. Still, they vow to stay together.

The next scene introduces us to Manon's older brother, Lescaut, who appears to be a soldier of some sort, and is generally an irresponsible, mischievous, troublemaking kind of guy. His girlfriend is the same sort, and the two of them are apparently very much into gambling. Lescaut introduces Roderigo to the gaming tables. (Perhaps Lescaut's gambling is part of the reason for Manon's family financial troubles?) Roderigo learns to gamble, hoping to make money in order to help Manon. In the middle of a game, a letter arrives from Manon for Roderigo.

Lescaut explains that the wealthy old Count Alphonso has always been attracted to Manon, and from Manon's letter it looks like she's planning on giving herself to him to get the money her family needs. Roderigo is heartbroken (he looks like he's going to be sick) but Lescaut encourages him to just leave it alone, let it happen, and then their problems will be solved and he can have Manon back. Roderigo and Lescaut go to the apartment in Madrid where Manon is entertaining Count Alphonso. The count has put a bag of money on the table, and Manon is flirting up a storm. She takes a moment, though, to sneak off and snuggle up to Roderigo, reassuring him that he's the one she loves. She goes back to the Count, and the two of them stand up to leave together. Roderigo can't take it anymore and yells out something about how Manon belongs to him. The Count gets angry, takes the bag of money he was going to give to Manon and storms out. Lescaut is furious. Manon isn't angry, and defends Roderigo to her brother, but breaks down in tears wondering what they're going to do now.

The only way to get the money they need seems to be to gamble, so Roderigo once again hits the gaming tables. For a while he's doing well, too, but he makes a couple of bad bets and his luck runs out; he loses everything. Frustrated and depressed, Roderigo is ready to leave with Manon, but Count Alphonso appears, and makes a suggestion. He tells Roderigo that he'll bet with him, even though Roderigo doesn't have any money. If he loses, he'll give Roderigo the full amount that Manon needs. But, if he wins, he gets Manon. Roderigo doesn't want anything to do with such a bet, but Manon begs him. She's willing to take the risk.

Reluctantly, Roderigo agrees to the bet and goes to the table. They draw their cards... and Roderigo wins! His excitement is short-lived, however, as one of Count Alphonso's men runs up and accuses him of cheating, and pulls a card out of Roderigo's sleeve (he does this so fast that we're not sure if Roderigo was actually cheating or if the guy was using a slight-of-hand trick). Roderigo denies it, of course, but Count Alphonso is enraged and immediately demands that the police arrest him. The police appear and corner Roderigo.

Alphonso grabs Manon and asks her to choose; she can either go with him, or he will have her arrested as well. Manon smiles flirtatiously, but then spits in his face. He hits her across the face and demands that she also be arrested. At this, Roderigo screams and breaks free from the police to run to her. But she is dragged away and he is beaten until he cannot fight back anymore. They grab Roderigo and throw him into jail.

Roderigo's "jail" is actually the monastery where he was supposed to take vows; they are keeping him under house arrest (it seems they're trying to convince him to repent and take the vows, and he keeps refusing.) His old friend Miguel is there, now a priest, also trying to talk to him. His mother visits him, and he tells her that he loves her very much, but still refuses to take vows. She leaves sadly.

Roderigo asks Miguel if he can write a letter to a friend he owes a lot to. What he actually does is write a letter to Lescaut, telling him to come see him at the seminary, and to pretend he is Rodrigo's brother so that he can get admitted. When Lescaut does this, Rodrigo tells him he needs his help to break out. He wants to borrow his unloaded gun the next day. They do this. Roderigo sneaks out of the building where he's being held and goes to the main building to get the gate keys. He isn't expecting his friend Miguel to be on watch, but still threatens him at gunpoint and grabs the keys. Out in the courtyard, they are surprised by one of the young boys who works at the monastery; the boy tackles Roderigo and the gun accidentally goes off. Rodrigo is shocked. There weren't supposed to be any bullets.... The boy is killed. Roderigo is both shocked and desperate at this point; he makes Miguel unlock the gate and then knocks him unconscious. Lescaut is there, waiting to take Roderigo to Manon. Roderigo and Lescaut run off into the night.

Manon has been assigned to what seems like a chain-gang of women; they are being taken to port in Seville to be shipped out (to Morocco? We aren't quite sure.) The soldiers in charge of the women are abusive, slapping them around and threatening them with guns.

Roderigo arrives at the port in Seville. He asks Lescaut for his help in getting Manon away from the soldiers, and Lescaut seems nervous and reluctant but is finally talked into it. When the soldiers arrive with the women, Lescaut bribes the head of the guard to release Manon to him. Manon and Roderigo are finally reunited, both exhausted and not sure what they're going to do next. They rest for a while near the port, then get ready to leave, but are spotted by a soldier. Roderigo fights with the soldier and kills him, and he and Manon have to run. Lescaut comes to their defense to try and buy them some time and is shot and killed.

Manon and Roderigo run, but Manon is hit by a stray bullet and dies in Roderigo's arms. Devastated, Roderigo mourns over her body, kisses her goodbye, and then jumps up with a gun. He is shot immediately, and dies next to Manon.