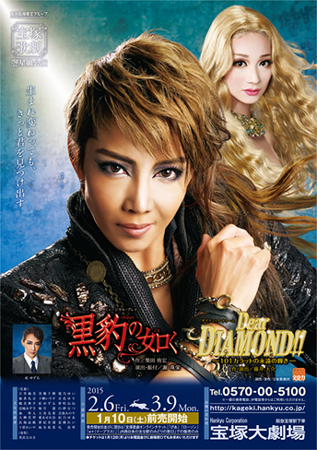 
†Due to injury, the shinjin kouen role of Bertran was played by Iroha Reo in the Grand Theater.

Antonio is descended from legendary pirates who defended Spanish waters from evil during the Age of Discovery long ago, as part of the national policy. Employed as Chief of Staff in the Spanish Navy, he is known far and wide as the "Black Panther," given his qualities of being deep, flexible and quick. Someone respects, someone is awed by, and someone is planning to use － to further his success in life － this hard-line and quick-witted man.

A gala banquet is held November 11, 1920, to mark the second anniversary of the end of the Great War, at the Naval Ministry in Barcelona. Gathered are soldiers, government officials and economic leaders. There, Antonio meets Caterina, his former love, for the first time in three years. She had been forced to marry the millionaire Marquis Ramirez to help out her father, whose fortune was lost as a direct result of the war. Yet the Marquis dies shortly afterward, and she is left a young widow. Antonio and Caterina, who separated and ended their relationship three years ago, both feel the movement of the time that has stopped. The reunion prompts their hearts to flutter. However, Duke Victor de Alarcon, top business magnate, makes his appearance, and he addresses Antonio. Yet Antonio feels a mysterious sensation, like a chilled net has just swished past. His intuition of "the black panther" has been activated, and so he makes his excuses and leaves the party. Antonio wonders whether there is any connection between his encounter with Alarcon and the frequent and recent disappearances of outstanding naval officers. In order to test a hypothesis that comes to his mind, Antonio dispatches his confidant Rafael to the Intelligence Department.

Antonio's hunch proves correct. According to Rafael, the missing officers were all critical of the current government and huge amounts of funds are flowing overseas, although their source isn't known, according to what is known at this point. Military personnel and money have vanished into the void, with the shadow of a "fixer" cast in the backdrop. Antonio heightens his guard toward Alarcon. The two have another meeting the following day. Alarcon attempts to recruit him to serve as the supreme commander of a newly powerful military force, several of which, mainly Italy and Germany, are continuing to grow. Alarcon clearly admits this was the objective of making contact with Antonio, saying he would like to serve as an intermediary. However, Antonio, who has devoted his heart and soul to the Spanish Navy, will not budge, no matter what kind of words Alarcon throws at him. Alarcon, who has grown exasperated at Antonio, who shows no sign whatsoever of yielding to the enticement of a position superior to his current one and huge sums of compensation, prepares his next step.

One evening, Antonio and Caterina have time alone on the deck of the Cervantes, on which he served as Captain many years ago. As the pair become enveloped in the light of the same evening sun as in olden days, their mutual desire for each other grows stronger than before. However, the relationship between Antonio and Caterina is threatened by the presence of Alarcon, whose figure is covered by a dark shadow.

Amongst the gems, the greatest and brightest is the King Diamond. Yuzuki Reon incorporates the diamond, and this review show takes the first letter "D" as its motif: Dance, Delicate, Dramatic, Dynamic. A glorious and beautiful show of love and dreams.