Loading...
Genroku Baroque Rock / The Fascination!
READ THIS BEFORE EDITING THIS PAGE 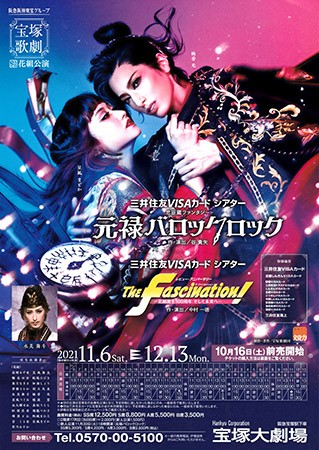 Edo, that cosmopolitan city of riotous flowers. There, the finest scientific minds from all over the world gathered, creating a brilliant flowering of baroque culture.

Kuronosuke, a kind and serious clock-maker and former retainer of the Ako Domain, enjoyed a peaceful life in Edo despite his poverty, until the day he accidentally invented a clock that could turn back time... and his life changed completely. He used the clock to win handily at games of chance, but that wealth changed him. Kuronosuke thoroughly enjoyed the fruits of his success, but the one thing the watch wouldn’t work on was women, where he could never seem to succeed. However, a woman with a mysterious smile was watching all of it. She called herself Kira, and she ran a gambling house. Kuronosuke became gradually infatuated by her beauty, which turned to an unhealthy love.

One day, Kuranosuke, a former chief retainer of the Ako Domain, paid Kuronosuke a visit. He had come to ask for Kuronosuke’s help in taking revenge on Kozukenosuke, whose enmity with the Ako lord Takumi no Kami had resulted in his seppuku. The Kuronosuke he found there, however, was barely a shadow of his former self and integrity. Kuronosuke’s heart ached as he clutched the clock to his chest and listened to Kuranosuke wish he could turn back time. However, his expression changed entirely with Kuranosuke’s next words. Kuranosuke had learned that Kouzuke no Suke had an illegitimate daughter named Kira...

Chuushingura is based on a true story from the Genroku era, and has been retold in all kinds of fiction. In this interpretation, this tale, which has been universally loved since time immemorial, is presented by the Takarazuka Revue of the love and fantasy-filled Reiwa Era in a way that’s sure to entertain.

The times of Kuronosuke and Kira align, and love shines in the heart of Edo, in a clock romance ticking away in a world of baroque rock.