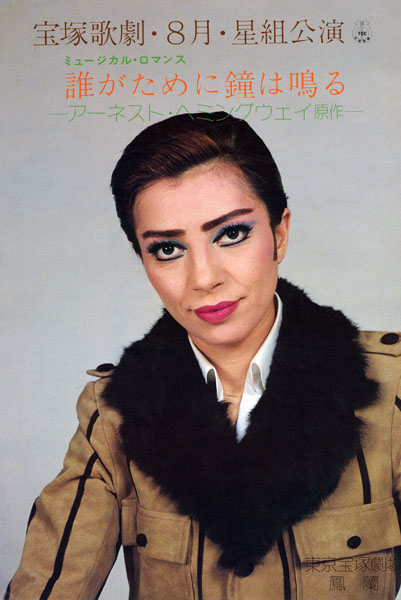 PART I. The Lonesome Wolves
It is 1936. In Spain the Fascists, with General Franco at their head, are rising everywhere, and there has been fierce fightings between them and the Republican Government's forces.

An American instructor named Robert Jordan has opened a charity show in Paris to raise money for the Republican cause, but as he can see that the Republican forces are faring badly, he decides to go to Spain and join the International Brigade. He is sent by General Golz of the service of the military intelligence on a commando mission behind enemy lines to blow up an important bridge.

Robert Jordan sets out with a packful of dynamite from Madrid to Guadarrama, a mountainous area 150 kilometres northwest of the capital. He is to blow up the bridge in the morning of the fourth day, just after the Republican forces have started a major offensive. The explosion must not be too early or too late, the bridge must be blown up exactly on schedule.

Robert Jordan reaches his objective with the help of a guerrilla veteran, Anselmo. After reconnoitering the bridge and the enemy positions he joins the guerrillas at their base in a cave in the valley. Their leader Pablo used to be a great fighter but recently he has lost his courage and turned cowardly, so he strongly opposes Robert's mission to blow up the bridge. Pablo's wife Pilar, a courageous woman, is trusted and dependable in the eyes of the guerrilla comrades. She supports Robert in his mission and thus wins over the other guerrillas to agree to it.

In the cave there is a quiet demure young girl named Maria, whose parents were put to death by the Fascists for being members of the Republican Party. She has had all her hair cut off and been foully degraded by the Fascists. Robert sees her and is immediately attracted by her; she is not uninterested in him either.

The next morning Robert goes out with Pilar and Maria to the hut of a neighbouring guerrilla chief, El Sordo, to ask for his support. The hut is high up in the mountains. El Sordo enthusiastically offers his support not only in blowing up the bridge, but he also promises to provide Robert with horses to make their escape after the bridge has been blown up.

By the way, El Sordo has a daughter named Rosa. She knows that her lover, Kashkin, has been killed by Robert, so she points a pistol at him. Robert asks her to wait two days before she kills him, so that he can complete his mission.

Now there is a flashback to several weeks before. Kashkin and Robert were both sent on a mission to blow up a military train; after they had blown it up, Kashkin, hit by an enemy bullet, begged Robert to finish him off. Robert did not know what to do, but realizing that the enemy were going to come any minute, with his eyes streaming tears, he shot Kashkin.

On the way back from El Sordo's hut Robert has time to talk to Maria, with whom he has fallen deeply in love. He thinks to himself: "Maybe I will be killed on this mission. But even if I have to buy these 70 hours with Maria by giving up 70 years of life, I will be content."

That evening El Sordo's band steals several horses from the Fascist forces' camp, but, as it has been snowing, their traces are discovered, and early the next morning they are attacked by Fascist cavalry and planes, and massacred. Robert feels strong remorse that he could not go to El Sordo's aid, and Rosa feels an overwhelming sadness...

Anselmo comes back from his mission reconnoitering the enemy positions, and reports that the artillery corps have crossed the bridge already and are on their way to the front line. Robert supposes the enemy are fortifying their front line because news has reached them that the Republicans are going to launch a major offensive. If this is so, the offensive is almost certain to end in failure. He sends Andres and Lutia, two guerrillas, to inform General Golz of the danger.

Maria, thinking that that night may be their last one together, tells Robert about her horrible, unspeakable experience. "I love you even more than before. It's just the same as if nothing had happened to you. You are my wife," whispers Robert as he holds her tightly in his arms.

Later on that night Pablo steals the detonator and makes off with it, but then changes his mind and returns it.

At last the morning of the fourth day comes, and the explosion is soon to take place, but even now Robert has a tiny hope that the mission may be called off at the last minute. But when Andres and Lutia's report reaches General Golz, the attack has already started, and the bombers have taken off.

Robert realizes the attack has begun when he hears the booming of the cannon in the distance. There is no time to lose. He fixes the explosives to the bridge. There is a tremendous explosion and the middle section of the bridge is blown into smithereens.

Pablo, Pilar and their band have just come back from attacking the enemy sentries, but Anselmo and three other comrades have been killed.

They cannot stay there; already they can hear gunfire coming from the enemy rear.

Robert gives the order to retreat, but just then he is hit in the leg by a bullet. Maria rushes to his side to help him, without a thought for her own safety. But Robert shouts "Don't worry about me! Run for your life!"

Maria is dragged away by Pablo, Pilar and the others. Robert waits for the enemy to come, with his finger on his machinegun trigger.