Loading...
Color Me True / Full Swing!
READ THIS BEFORE EDITING THIS PAGE 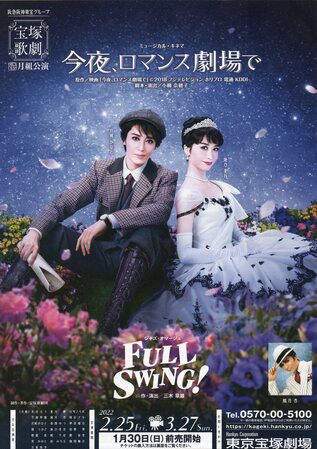 Tonight at the Romance Theater:

Kenji Makino is a young man who dreams of becoming a film director. He has been enamored with the heroine Miyuki in an old black-and-white movie, “The Tomboy Princess and the Three Jolly Beasts”.

Kenji currently works as an assistant director at Kyoei Film. He whiles away his after-work free time at the Romance Theater meeting Miyuki in the movie, instead of hanging out with his friend and rival Shintaro Yamanaka. One day, Kenji is devastated to learn that the theater owner Honda has decided to sell the old reel of film. Kenji makes a wish to the god of movie: “Let me be with her forever…” Then he reaches out for Miyuki on the screen, and Miyuki extends her hand as if in respond to it. That’s when something miraculous happens; following the voice of Diana the Moon Spirit, with a terrific clap of thunder, the theater is plunged into darkness…

Kenji stands up while the emergency lights are on in the theater. What he sees, much to his surprise, is Miyuki emerging from the screen into the real world. Kenji is so astonished that he tries to touch her hand, but Miyuki hits him on the head with a soda bottle that has fallen nearby. Kenji covers Miyuki with his jacket to conceal her identity and takes her to his apartment. Miyuki is full of curiosity about the world she is seeing the first time in color. She wants to go out to see more things and orders Kenji to take her to his workplace.

The next day, the shooting of a movie is about to start at the studio, which title is “Horror! Yokai Monsters and the Handsome Guy”. This is the latest one of a very popular series starring Ryunosuke Shundo, who is Kyoei’s biggest star. Miyuki has no regard for others, even Shundo. Her uninhibited behavior causes chaos on the set, leading to an accident that makes Kenji suspected of being a bomber. Kenji is at the mercy of Miyuki’s feisty personality and tomboyish behavior, yet he becomes more attracted to her as they spend more time together. One day, Kenji and other assistant directors are told to write a new script, due to the suggestion by Toko Naruse who is the daughter of Kyoei’s president and has secretly fallen for Kenji. They are excited to hear that the best script will be made into a movie and will be directed by the scriptwriter himself. Kenji wonders what to write, but finally he decides to write a script about his days with Miyuki, thanks to Honda’s advice. Kenji goes out with Miyuki to gather materials for his script. They are drawn to each other while having fun together in the world filled with colors, such as a colorful shaved ice, a seven-colored rainbow, and a red windmill. Kenji tells Miyuki that his script will definitely have a happy ending.

When he returns home, Kenji is visited by Orochimaru with his attendants: Amagiri and Sagiri. Orochimaru is the prince of a neighboring country to Miyuki’s, who wants to take her for his wife. To bring Miyuki back to the inner film’s world, they have come to the real world with the help of a god called Teruteru Daimyojin. Learning Miyuki’s big secret from Orochimaru, Kenji agonizes over the reality that he will not be able to make Miyuki happy. Meanwhile, Miyuki also wishes for Kenji’s happiness, and that’s why she disappears from his sight.

Kenji lives in the real world while Miyuki is the heroine in the black-and-white movie. How will the story of Kenji and Miyuki who are from different worlds end up?

“FULL SWING!” is a dazzling show featuring lively jazz music. Opening with a gorgeous prologue celebrating the birth of the hero of swing, this delightful performance is rich in variety, showing both the stylish and soulful sides of jazz. We hope that you will enjoy this funky and swingin’ world of jazz, steeped in the wondrous charm of the Moon troupe led by their new top pair!