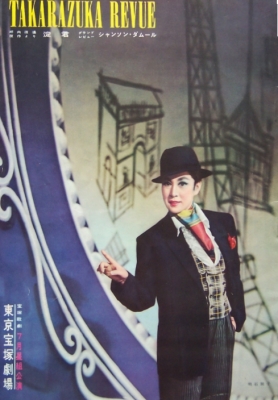 Written and Directed by Takagi Shirou

Scene 1. Ca c’est Paris.
A man, attired in swallow-tailed suit, appears on the stairs and sings the song of “Ca c’est Paris.” This is followed by a horde of men and girls.


Scene 3. Chanson d’Amour.
A chansense sings before a big accordion, accompanied by an accordion player. Then, sixteen accordion rockets dance.


Scene 4. Downtown in Paris.
The scene is set in a downtown in Paris, with stone stairs in the center. As a pistol shot comes from up the stairs, a woman is seen fleeing down them. A murder case – a group of tourists is caught in the ensuing turmoil.


Scene 6. Tricolor.
As the flowers on the stage change colors from pink to blue and white, dancers, in varying costumes, appear dancing in turn.


Scene 7. Flower That Blooms in Dream.
A female dancer, whose skirt flows over the stage, sings with a tiny mirror in hand. Soon, a group of men and women emerges through the skirt, ending up in a gala dancing by all on the stage.


Scene 8. C’est la Vie.
A Parisian appears on the stage, and relates his life story in song.

As he sings, the episodes of his life coming up and vanishing by turns are remembered.


Scene 9. Falling Leaves.
As the music of “Falling Leaves” is played, an alcohol-addicted woman appears and remembers memories of her past glory. Eventually she becomes insane and kills herself by plunging into the river from a bridge.


Scene 10. La Seine.
As gas lights twinkle in the distance, sixteen gentlemen dance to the accompaniment of a song sung by a swallow-tailed man.


Scene 11. Fantasies of Versailles.
In a garden with a fountain, a woman stands as if waiting for a person to come up. Music is heard far-off, and she is into fantasies.


Scene 13. Ca c’est l’Amour.
A female singer sings before a piano while two gentlemen dance. Then, three dance together while singing.


Scene 14. Piano.
Three men dance a tap dance. The rockets of the keys of the piano dance a lined dance.


Scene 16. Finale A.
A flower, as big as the stage, collapses, its petals turned into so many dancer-girls who dance together.


Scene 17. Finale B.
A pretty flower vendor-girl sings, while other girls spread flowers.

This is a dramatization of “Yodogimi,” a masterpiece by the late Shoyo Tsubouchi, the great playwright, critic and Shakespearean scholar of Japan, dealing with the strife between the Toyotimis and the Tokugawas, one of the most interesting historical episodes through Japan’s history.

Following the death of Hideyoshi Toyotimi, who unified war-torn Japan by civil wars, the fate of the Toyotimis steadily waved through their defeats in the Sekigahara Battle and the Battle of Osaka in the early summer of 1615, and their authority over the nations was rapidly being replaced by the Tokugawas.

“Yodogimi,” Hideyoshi’s widow, intrigues to let her son, Hideyori, succeed the hierarchy bequeathed by her late husband. However, she is forced to be reminded of her helplessness in the face of the tide of the times.

On May 7, 1615, Hideyori and “Yodogimi” wage the last showdown on the battlefields with Ieyasu Tokugawa. Yodogimi hinges her last hopes on the person of Sen-hime, Hideyori’s consort, who, being a granddaughter of Ieyasu, might be utilized as a hostage. In the confusion of the fighting, however, the young lady falls into the hands of the enemy.

The Osaka Castle is thickly besieged by the Tokugawa troops. “Yodogimi” seeks shelter in the ammunition depot. The last minutes of the once-powerful Toyotimis are being numbered.

Defeat and confusion – and “Yodogimi” finds herself in an uncontrollable mental confusion and frenzy. In utter despair and hysterical dejection, she grabs the robes left by Sen-hime, abuses the name of Ieyasu and consoles herself by taking pride of her status. She is so upset.

Hideyori tries to bring his mother back to senses. In the meantime, the ammunition depot, where they hide themselves in shelter, takes on fire, telling the last moment of their family and the Osaka Castle, their citadel, fast approaching.