Loading...
A Second Fortuitous Meeting Next Generation / Gran Cantante!!
READ THIS BEFORE EDITING THIS PAGE 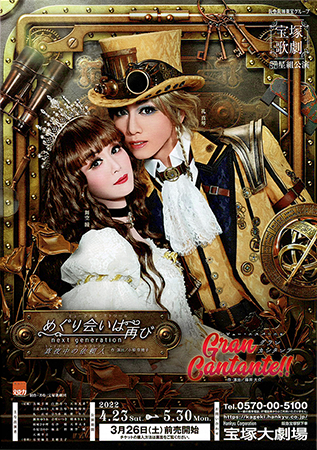 A Second Fortuitous Meeting Next Generation:


A Second Fortuitous Meeting Next Generation

The story is set in the not-so-distant past in Markt, the capital of the Kingdom of Vespert. There, the Star Festival is about to start, which is the annual event held on the day when the first appearing star in the northern sky reaches its highest point of the year. This year’s Star Festival, while the sefirot tree is in flower that blooms only once every ten years, brings a lot of excitement to the capital with fun attractions such as the entertainment by an itinerant troupe, a dance competition, and a contest to select the princess’ husband-to-be.

Luce d’Orgon is the youngest son of Count Orgon, a rural lord. Luce left his home village of Phosphor to attend college. Since graduation from college, he has been making a living by working for a small detective agency that is run by his friend Regulus Bartle. Luce has been dating his girlfriend Angelique for more than ten years, but their relationship has never progressed to the next stage. In fact, Luce has not seen Angelique since they had a falling out after he did not hold her back when she was approached about an arranged marriage to another man. One day, the detective agency receives an odd request. According to the client, a warning letter has arrived at a certain place from Da’at, a master thief who has recently been causing a stir in the city, that he is going to steal a treasure which has been passed down in the Chorus royal family for generations. The treasure "Unicorn Chalice" is the royal regalia. The selected one as the princess’ husband-to-be will become the heir to the throne and receive the chalice. The client thus asks Luce, who is the only detective in the kingdom with a title of nobility, to protect the chalice by participating in the contest as an undercover candidate for the princess’ husband-to-be. It sounds too outrageous to Luce, and above all, he cannot get over Angelique. Though Luce wants to turn it down, Regulus immediately accepts the request in exchange for a large reward. At this time, Luce does not yet know that there is a secret hidden behind the selection of a prospective husband for the princess.

A few days later, the contest to select the princess’ husband-to-be is held with a large number of candidates from home and abroad. While searching for anyone suspicious, contestant Luce is required to pair with a noble young lady and work on a task together. Much to Luce’s surprise, it is Angelique who is his partner.

Something is not quite right in the contest to select princess’ husband-to-be. The truth is, there is a plot behind this contest that could destabilize the country. What is waiting for Luce? And how will Luce and Angelique’s love relationship turn out?

"Gran Cantante!!" is Spanish for "brilliant singer." The theme of this revue is a traditional Spanish festival, featuring enchanting Spanish dances and famous songs written about Spain. Enter the glamorous and passionate world of this revue that relies on the current dynamics of Star Troupe, showing off the talents of Rei Makoto, a well-rounded top star.