Loading...
A Fairy Tale / Charme!
READ THIS BEFORE EDITING THIS PAGE 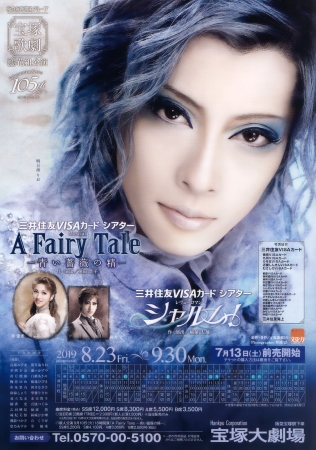 A Fairy Tale
The Vickers Bros. Co. is an enterprise dedicated to botanical research, one of England's state industries at the time. A botanist who works at the company, Harvey, receives an order to restore a neglected garden into a rose bed. As chance would have it, Harvey's uncle, Nick, once labored painstakingly here as the gardener.

On the way there, Harvey comes across bad weather and finds himself enveloped by a dense fog. Under the blanket of the mist, he hears the sound of the wind, the calls of wild birds, and then a mysterious singing voice, seemingly beckoning Harvey to some strange place not of this Earth. Then, he sees before him the garden covered by a blanket of blue roses. Manifesting there is Elu, the Spirit of the Blue Rose, who possesses such beauty as to be undoubtedly otherworldly. Elu, with a cryptic smile, floats up and informs Harvey that they shall meet once again in the mist.

──The following morning, Harvey hears from a mysterious old lady about why flowers no longer bloom in the garden. ──

It was 50 years ago, when the residence was known as the Wingfield Mansion. In the garden there grew a spectacular collection of roses. Among the fairies who resided there was Elu, the Spirit of the White Rose. He was the most beautiful, elegant and graceful of the fairies, and he was acknowledged by all as "the chosen one." On the night of the summer solstice, when the moon was full, Elu suddenly came upon a girl named Charlotte, who had gotten lost in the garden. Charlotte was the only daughter of Viscount Wheeldon, who stayed at the mansion with his family when the roses were in season. Charlotte believed in the fairies, and her desire to meet them caused a magical door to open up on that summer solstice night. When their eyes met, both Elu and Charlotte's hearts were so moved that they vowed to meet each other in the garden every year when the roses were in bloom. As time went on and Charlotte grew up, she became even more beautiful. And with every passing year, Elu would eagerly await the season when he could meet Charlotte. However, this cherished time when they could be together soon came to an end. Under the laws of nature, fairies are bound to protect humans without being seen, and before a human child grows into an adult, a fairy must sprinkle the Dust of Forgetfulness over that child to erase all memory of the fairies. During the final rose season when he could meet Charlotte, Elu violated this law. When Deva, the Goddess of Nature eventually laid down her judgement for this crime, Elu was transformed into the Spirit of the Blue Rose, a plant which does not exist in the real world, and the gorgeous garden was shrouded in mist.

Until Elu has repented for his crime, he and the other fairies must dwell in the dark cover of the fog. It remains to be seen whether Elu will fulfill his wish to reunite with Charlotte, and whether he can regain his original form and the day comes again when the beautiful roses of the Wingfield Mansion's garden come back into bloom.


Charme!
The French word "charme" can express ideas such as "attractiveness," "loveliness," "magic" and "bewitchment." Lurking amid the flowers and lights of the city of Paris is a revue that unfolds on a stage below the city streets that is at once both provocative and captivating. Flower Troupe, a unique group led by Asumi Rio and her ability to amaze and mesmerize audiences with the variegated forms she takes on with each performance, hits the stage to present sophisticated brilliance, sensual beauty, along with hope of finding the light in the darkness.