Loading...
Years of Pilgrimage / Fashionable Empire
READ THIS BEFORE EDITING THIS PAGE 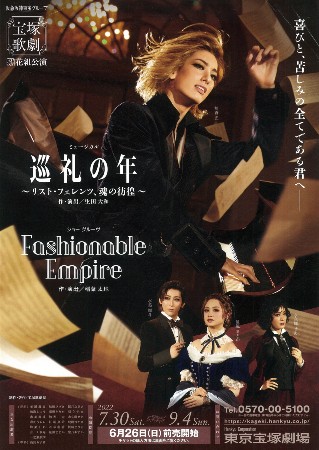 
Years of Pilgrimage: The Wandering Soul of Franz Liszt
Written and Directed by Ikuta Hirokazu

Called the "piano wizard" by many, Franz Liszt was a virtuoso pianist that took early nineteenth-century Europe by storm. He conquered the Parisian salons with passionate performances marked by excellent technique and handsome features that became the downfall of many women. In the blink of an eye, Liszt had grown into a phenomenon. But what was he truly after?

While acknowledging his Hungarian heritage, Franz Liszt never learned to speak his mother tongue. Seeking to live as "Liszt Ferenc" that he considered his true identity, he also delighted in presenting as the charismatic and magnetic "Franz Liszt" that his admirers wanted to see. Gradually, Liszt began to feel torn, trapped between these two identities.

The musical narrates the story of Liszt's early years, and his pilgrimage across Europe in an attempt to find a place where his soul could belong, focusing on the romance with his soulmate, the Countess Marie d'Agoult, and his greatest friend and rival, Chopin. A musical that explores identity, self, and what it means to live life on one's own terms.

A revue that transforms the stage into the "Empire" where the pioneering fashionistas of our time gather. The stylish array of scenes will enchant the audience, at times with the cool atmosphere, and at times with the hot beats. While focusing on the sophisticated and metropolitan appeal of top star Yuzuka Rei, this revue also shows off the unique, scintillating members of Flower Troupe through many groovy scenes.