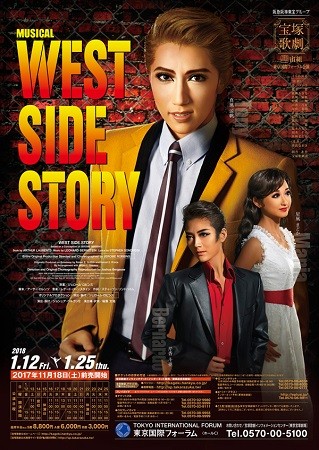 Meanwhile, Riff is having a hard time getting his best friend Tony to re-join the gang. Riff convinces Tony to join the Jets at the neighborhood dance where Riff's plan will be put into motion. Tony agrees out of a sense of loyalty to Riff, but expresses his unhappiness with his current life. He feels himself growing away from the gang and envisions a different and better future ("Something's Coming").

Maria, the sister of the Shark leader Bernardo, has only been in America a short time. She works with Anita, Bernardo's girlfriend, in the bridal shop. Anita is making Maria a dress to wear to the neighborhood dance. Maria sees this dance as the official beginning of her life in this country. Like Tony, she is full of hope. Bernardo arrives with Chino, a quiet, intense member of the Sharks. Maria's family has selected Chino to be her future husband.

A social worker, Glad Hand, introduces the rival gang members and their girls; they dance sociably for about two minutes. Then a challenge dance erupts. Tony and Maria, however, suddenly see one another. In a moment of romantic suspension, they dance together, oblivious of the tension around them. They fall in love. The romantic idyll is interrupted when Bernardo roughly pulls Maria from Tony's arms. Maria is sent home, as Riff and Bernardo arrange a War Council at the drugstore.

At the drugstore, the proprietor, Doc, tries to convince the Jets not to have a rumble (an all-out fight) with the Sharks. The gang expresses their pent-up tension in "Cool." Ignoring Doc, Riff and Bernardo set up the rumble for the next day and agree on weapons. Tony suggests a less dangerous fist fight. After the others leave, Tony dismisses Doc's fear with his conviction that nothing can go wrong because he is love with Maria.

The next day, Maria learns about the rumble from Anita at the bridal shop. When Tony arrives, Anita leaves. Maria begs Tony to stop the rumble and he promises her he will. They enact a mock marriage ceremony ("One Hand, One Heart") swearing that "even death can't part us now."

Unaware of the tragedy under the highway, Maria sings to her girlfriends about how beautiful she feels ("I Feel Pretty"). She speaks of marriage, and her friends assume she is thinking about Chino. Chino enters with the news that Tony has killed Bernardo. Left alone, Maria is praying; Tony enters through the window. He explains why he killed Bernardo in a moment of anger over Riff's death. Maria forgives him, and they declare their determination to be together. Shark and Jet couples dance together in a dream-like, peaceful, sunlit world — the "Somewhere" where Maria and Tony are allowed to love one another. At the end of the dream Tony and Maria are in her bed, in each other's arms.

Anita arrives at Maria's apartment. Tony escapes through the window, telling Maria to meet him at the drugstore so they can run away together. Anita realizes Tony has been with Maria and turns on Maria in fury for making love to the boy who killed her brother ("A Boy Like That"). However, when Maria explains ("I Have a Love"), Anita realizes that Maria loves Tony as much as she loved Bernardo. She warns Maria that Chino has a gun and is planning to kill Tony. When Shrank arrives to question Maria, Anita agrees to go to the drugstore to tell Tony to wait for her.

Anita is prevented from reaching Tony by the ethnic prejudice of the Jets. The gang's verbal taunting of Anita gets physical and almost turns to rape, but she is saved by Doc. In her fury and humiliation, Anita lies and tells Tony's buddies that Chino has killed Maria.

Tony is hiding in his cellar. Doc arrives and tells Tony that his dreams for the future are dead, because Maria has been killed. Tony runs out to find Chino. In the street, Tony sees Maria. Chino appears and shoots Tony. As Maria kneels over Tony's body, the Jets and Sharks enter. Maria takes Chino's gun, but is unable to bring herself to fire it. The cycle of violence ends with her.