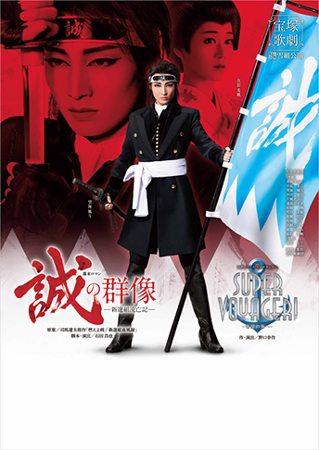 The Spirit of the Samurai:

The Spirit of the Samurai

This show follows the end of the Shinsengumi, as they are broken apart both from without and from within. In this Takarazuka version, Hijikata is portrayed as "the last true samurai" — a man who will stick with his ideals, no matter the cost to himself. He sees any man who fails to uphold his oaths as a rebel and a traitor. Thus he forces Serizawa to commit seppuku when the man looses himself too much to drinking and women.

We watch as the Shinsengumi lose popularity in Kyoto because of their behavior. Although Hijikata doesn't let it show, he feels the nickname of "demon" deeply. Yamanami, meanwhile, does not like the direction the Shinsengumi have gone and leaves. Hijikata is forced to send Okita after him as a traitor.

The temporary Republic of Ezo crumbles around them, and Hijikata sees no place for himself in the new Meiji government. He resolves to die in battle.

Beginning with a dynamic prologue featuring the departure of luxury passenger ships, this show will be built around images invoked from the top star’s name 「望（HOPE）」「海（OCEAN）」「風（WIND）」「斗（BIG DIPPER）」 that overflow with hope for the future. New scenes will be added for the national tour.

Please look forward to the ultimate form of entertainment that combines the otokoyaku aesthetics of Nozomi Fuuto and the charm of the new Snow Troupe.