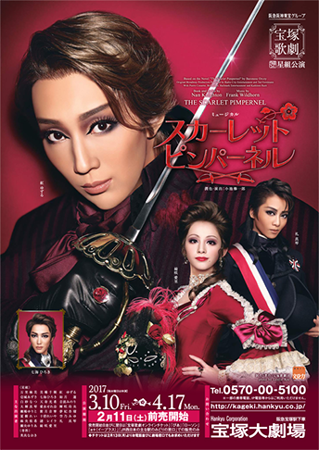 “The Scarlet Pimpernel” became a mega-hit after its first performance on Broadway in 1997, and struck gold again with the Star Troupe’s first-in-Japan 2008 performance, which received the Best Play Prize at the 16th Yomiuri Theatrical Grand Awards and the 34th Kikuta Kazuo Theatrical Performance Grand Award. The Takarazuka exclusive version, given an original twist, won great acclaim for its exciting adventure and action as well as its dramatic and emotional depictions of a couple in a dysfunctional relationship delivered with Frank Wildhorn’s musical masterpieces. The Moon Troupe’s performance in 2010 followed in the footsteps of success. The long-awaited showpiece is back again on the Takarazuka Revue stage after a seven year absence. Please look forward to a new page in the history of “The Scarlet Pimpernel” brought to you by our new Star Troupe, led by the fresh top stars, Yuzuru Kurenai and Airi Kisaki.


At the end of the 18th century in France, a revolutionary storm is raging in Paris. The monarchy was abolished after the populace seized the Bastille prison in 1789. While the Jacobins led by Robespierre are arresting and sentencing nobles to death, the angry populace are demanding more nobles be sent to the guillotine. Percy Blakeney, an English aristocrat, dislikes the reign of terror by the French revolutionary government. He is saving innocent nobles from the daily executions and helping them to flee France. Although his daring rescue attempts are much talked about, he has been successful in keeping his identity concealed. Chauvelin, a member of the Committee of Public Safety of the French revolutionary government, is out to discover the identity of the Scarlet Pimpernel, which means a red star-shaped flower in England.