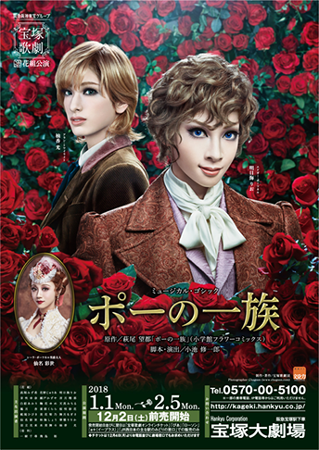 (Summary from the official web site)

"THE Poe Clan" of Immortal Vampanellas

Once a Vampanella breathes unnatural life force into you with a penetrating kiss, you will never again know love, nor be permitted to dream about a bright future. You will only be shrouded in sorrow for the rest of eternity.


In the woods near the English village of Scotty, an eerie breeze shakes the trees at night.

"Don't cry, Marybell! Your big brother's here for you..."

When their nanny abandoned young Edgar and his baby sister Marybell in the forest, they meet an old woman named Hannah Poe. She invites them into her house, located deep in the woods and covered with roses in full bloom.

Thirteen years after first setting foot into that home, the beautiful lady Sheila Portsnell, accompanied by her husband the Baron Frank Portsnell, pay a visit to the mansion.
"What beautiful people..."

However, when Edgar, acting on a sudden impulse, happens to witness a secret ceremony, he finds a horrific fate awaiting him. Sucking upon the neck of Sheila, who had vowed her eternal love to the Baron, was none other than old Hannah. Having discovered that they are a clan of Vampanellas, Edgar, his body trembling, begins to observe Hannah more closely.

"When I reach adulthood, will they add me to their family, too?"


During an utterly dark time in his life, Edgar keeps careful watch every moment. Then, all of a sudden, the villagers of Scotty learn of the family's true nature. Armed with stakes and torches, they surround the mansion.

Edgar then does all he can to protect Marybell.

He offers his neck to King Poe, the member of the clan in whom resides the thickest, most powerful blood.

Over time, Edgar's body begins to change, slowly but inexorably...


In 1879, in the growing port town of Blackpool, Edgar becomes acquainted with a young boy by the name of Alan Twilight. Edgar wishes to bring Alan, who lives a lonely, loveless life, along on his endless journey through existence. Their two souls, crying out together, begin to wander...

Wandering in search of someone to love, and to be loved by...