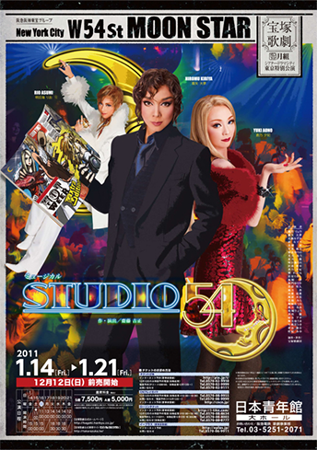 Set at "Studio 54", a discothèque in New York that captivated celebrities all over the world from the latter half of the 1970s to the 1980s. A musical production about a runaway papparazzo following a scandal and his target, an up-and-coming actress, who connect with each other after a certain incident. Holly Ashley is a freelance journalist who supplies "scoop" photos and gossip articles to tabloids and evening magazines. One night, a party is held at Studio 54 celebrating the release of rock star Z-BOY's new album. Holly gets an exclusive story on the up-and-coming actress Giselle Morgan, who is rumored to be Z-BOY's lover. But Z-BOY's agency interferes with the article being published. Holly needs money — to give back to the orphanage where he was raised. Desperate, he chases after the pair and gets involved in an incident...

Enter Luis (Ren Ruisu) as a rather frantic young man dropping his baby off at a Catholic orphanage on Christmas Eve before racing off again. The nun (Sister Pamella - Hanase Mizuka) is a bit befuddled, as it's never happened in quite that way before, but she eventually takes the baby foisted on her. The father throws his card at her before racing off, from which she learns that he is Boris Ashley, a journalist.

Jump forward and we are introduced to Studio 54, the exclusive New York club. All kinds of celebrities pour into its doors. Also, some lucky young people waiting outside are hand-picked and allowed to enter by the owner (Steve Rebel - Koshino Ryuu), including one rather lanky and wide-eyed young man in a baseball cap (Zack - Asumi Rio).

Jump forward yet again, and we are inside Studio 54, where the staff and audience are buzzing over the anticipated return of Z-boy, the rock star who got his beginning there. Among the crowd in the bar is Holly Ashley (Kiriya Hiromu), a friendly young man whom everyone there believes to be a journalist. In fact, he's paparazzi for a rather trashy tabloid called Hot Week.

Z-boy arrives and performs, but then begins causing all kinds of scenes. Leah (Ayahoshi Rion), his ex-girlfriend and a singer at Studio 54, shyly welcomes him back, only to be completely snubbed when he asks her who she might be. Then his girlfriend is late, and when her manager (Langley, Leah's brother - Seijou Kaito) tries to make her excuses, Z-boy pulls out his ever-present switchblade and cuts his face, laughingly saying that it's an improvement. The girlfriend (Giselle - Aono Yuki) arrives at last, apologizing profusely, but Z-boy hits her so hard she falls to her knees. As he goes after her again, Holly intervenes. Z-boy sneeringly asks who he is and promises not to forget before storming out. Giselle also snaps at Holly, telling him it wasn't his business to interfere in.

An exasperated Holly is reminded of another blond lady in his life: In flashback we learn about Becky, another orphan and Holly's friend, who dreamed of being a star. Holly wanted to be a novelist, and wrote her a story called My Little Lover. It was a kind of modern fairytale about a girl becoming a star and living in Manhattan. Absolutely adorable scene of Holly asking Becky if he can kiss her, her teasing him and asking if he likes her, and then allowing him to kiss her on the cheek.

Holly leaves Studio 54, picking up his hippie partner Bud (Aoki Izumi) who had been patiently waiting outside. They head home.

Meanwhile, in the offices of Hot Week, their chief editor is 80s punk fashion horror and terrifying dictator Lucy (Touka Yurino), who spends her time browbeating her cowed staff (Harry - Hibiki Reona, Larry - Takasumi Hayato, and Billy - Kijou Mitsuru) and sending them off to fetch her Pepsi. She assigns Holly to dig up dirt on Z-boy and his mysterious lover, Giselle.

Small interlude as Holly visits the orphanage and we are introduced to Abel, a young boy with a heart condition which will be fatal without surgery. Holly is working to help raise the money. Watching Abel play with his friend Lee, Sister Pamella reminisces that they remind her of Holly and Becky. In flashback we learn that Becky left suddenly to work in Boston, and Holly hasn't heard from her since.

Of course, it isn't long before Holly's cover is blown and he is bared from Studio 54. He and Bud get some shots of Z-boy leaving Studio 54 with Giselle, and in revenge Z-boy sends some punks to beat Holly and break his camera. When he regains consciousness, he finds himself on the couch in Giselle's apartment. She icily explains she didn't want anyone dying on her account, warns him away from Z-boy, and tells him to let himself out before she leaves.

Curious, Holly pokes about the apartment and discovers both the doll that Becky always had on her and his story My Little Lover. He realizes with shock who she is, but it's too late to stop the story from going to press.

Meanwhile, journalist Boris Ashley returns to America after 30 years behind the Iron Curtain. He goes to visit the orphanage to explain his actions (friends depending on him, national security, and being unable to bring a baby with him). He adds that his time is limited - he has come home to die.

There is a press conference where a stage production of My Little Lover is announced, starring Giselle and Z-boy. Holly gets into it by convincing fellow orphans (and current NYPD: Douglas - Tamaki Ryou & Jamie - Hanahi Mira) that Giselle is their old play pal Becky. Holly pushes his way in and reveals his identity to Giselle.

On the news, we learn that Giselle has been receiving threatening letters.

Visiting Abel in the hospital, Holly is startled to find him reading Hot Week, but reassured when he hears the boy loves the alien stories. He meets and talks to Boris, who doesn't reveal his true connection to Holly. (Holly is a bit thick, and while happy to meet another journalist with the last name of Ashley, never quite puts two and two together.) Boris assures him a journalist's calling is to help others, and points out how much Holly's articles have helped keep Abel's spirits up. Holly is startled but finds new purpose.

Determined to get rid of Holly, Z-boy tempts Neil, a young host at Studio 54 who idolizes him, by promising to make him a star and to give him Studio 54. There is a lot of bribery going around... Steve abuses his position as Z-boy's mentor to get into his pants, and when the rock star starts growing cold and giving Giselle too much attention, promises the younger man Studio 54 and all his wealth. He makes his point by pulling all his money out, dumping it on his bed, and luring the suddenly-not-a-bit-reluctant-anymore Zack to bed. Between them, the two have cooked up the letters to get more publicity for the play.

Neil attacks Holly, and when Holly realizes what has happened he talks Neil back to his senses. Neil promises to help him get into Studio 54, where a promotional Christmas event is being held for My Little Lover. Z-boy has convinced Giselle to appear in public, despite how much she fears for her life. Bud, Lucy and the Hot Week gang also waltz in bearing passes Neil has provided them.

Holly gets there just in time to step between Giselle and a bullet meant for her, shot by Leah. Langley had gotten her involved on a promise from Steve that once Giselle was dead, Leah would star in My Little Lover. Somewhere in his blackened heart, Z-boy really had been in love with Giselle, and he's on the edge of a breakdown as he complains that he would never be the one to protect her, to be the little lover's hero, because Holly was always the one.

Holly recovers from the bullet in his shoulder, and has a quiet talk with Giselle (Becky once again), who is determined to return to Boston and do it right this time. He tells her that he found her once, he'll find her again.

At the hospital, Abel cheerfully recovers from his surgery, paid for by the money Holly and Hot Week made with their huge scoop about the fall of Studio 54. Sister Pamella tells him sadly that Boris has passed away....