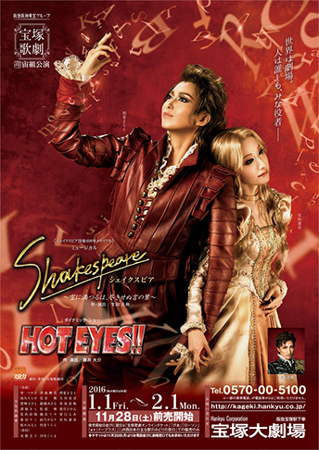 An original Takarazuka show to celebrate the 400th anniversary of Shakespeare. About his love for his wife Anne Hathaway, his friendship with Lord Hunsdon, and the secret love affair which provided him with inspiration.

It's the late 16th century. This is an era when people have been forced to live in close quarters with death after an outbreak of the plague. In London, stage plays that make people forget about their daily lives are gaining in popularity, and so the residents flock to theatres day after day. One of the new productions is "Romeo and Juliet." The person who wrote the script is William Shakespeare, a new and still unknown playwright. Even so, he and his wife Anne are quite convinced that very soon all of London will know William's name. While watching the love stories played out on the stage, they reminisce about something from six years ago. It so happens that "Romeo and Juliet" is also a story of William and his wife.

Stratford-Upon Avon lies northwest of London. When he helped his father with his work, William used to spend each day writing poems and dreaming of becoming a playwright. One day, he is in the forest working on a poem when he encounters a woman. Her name is Anne Hathaway, and she is hiding in the forest to escape from her family that is trying to betroth her to a wealthy man. Anne is interested in William's poetry. She takes his parchment away from him and reads it aloud. William is startled, and he tries to take it back. Yet he is quickly captivated by her mystery. The fragments of words that have been filling his head take form, and he starts to weave his phrases together one by one. William's pen races along the paper as if moved by a wizard. Without a doubt, she is the goddess in his word. Sensing that meeting Anne was his destiny, William confides his love through his words. Anne is also taken with William, who can render the world around her into words. She embraces his thoughts and feelings, yet a wall stands in front of them. William is sentenced to permanent exile after causing disturbance in the city. The couple are caught in a bind, with no expectation of being allowed to marry. However, one person is able to extend a helping hand. George Carey is a London nobleman who is working on a plan to establish a theatrical company for the Queen, who happens to love the stage. He proposes that William join as one of its playwrights. William, seeing this as a chance to fulfill his dream, has no hesitation. His mind is definitely made up. On condition he must go to London alone, William holds a wedding with Anne with George's permission, and he heads off to the city alone after telling her he will be sure to come back for her.

William sees success in London, just as he had promised. He summons Anne and his son from his hometown, and the three settle down to a new life. The playwright is acclaimed not just by the people of London but by Queen Elizabeth I. William's confidence grows. However, one of his lines that has the power to move people's minds will become intricately entwined with the thoughts and feelings of the aristocrats who are concerned with making their own lives successful - and will eventually cause turmoil even to the lives of him and Anne.

A glamorous, passionate show that pairs elegance and dynamism, creating various images inspired by the sparkle and passion of the eyes of Top Star Asaka Manato and the actresses of Cosmos Troupe.