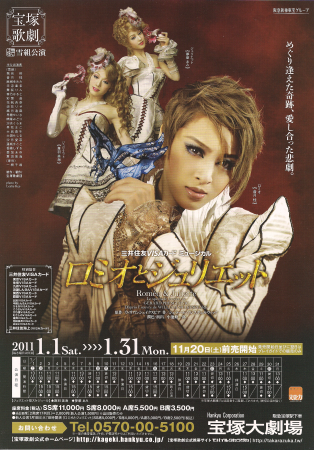 Within the Capulet family, a proposal has been made for the marriage of a daughter, Juliette, with Count Paris, Verona's wealthiest citizen. The Count has offered to take care of the debts the Capulet family has been running up. Tybalt, a nephew of Lord Capulet, has loved Juliette since childhood, and he is opposed to the proposal. However, Lord Capulet rebuffs his nephew, and he schemes to bring the pair together at a masquerade.

Benvolio and Mercutio, who are friends of Lord Montague's son Romeo, goad him to sneak into the ball. Once inside, Romeo encounters the girl of his destiny, with whom he is bound by an invisible thread. The girl is Juliette, who now is trying to evade the man her parents have chosen for her. These two anxious lovers are convinced in an instant by what has appeared right in front of their own eyes. However, Tybalt makes a commotion, saying that a member of the Montagues has sneaked into the ball, and Romeo makes a quick exit. Although Juliette is aware that the person she has fallen in love with is a Montague, she cannot suppress her thoughts about him. In the meantime, Romeo, filled with thoughts of Juliette, finds himself unable to leave the Capulet residence. The couple is reunited while Juliette is on her balcony, as she thinks wistfully of the lover whom God has delivered to her. The couple makes an oath of love that transcends their family background, and they vow to marry before the engagement between Juliette and Count Paris can be made formally.

Romeo visits Father Laurence the following morning to ask him to conduct the wedding ceremony between him and Juliette. The priest is surprised by the news of a Montague marrying a Capulet. Even so, he appreciates Romeo's firm determination and also that the marriage could well help resolve the hostilities between the two families. Father Laurence instructs Romeo to come to the chapel that afternoon with Juliette during confession hour.

Helping out is Juliette's nanny, who is moved by the depth of love the couple has for each other. That afternoon, Romeo and Juliette exchange vows of eternal love in the presence of Father Laurence. The couple may be infinitely happy now, but little do they know of the tragedy that will soon come their way.