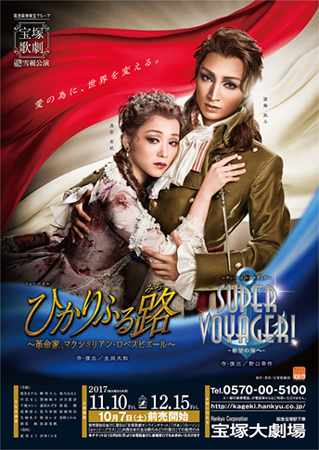 From the official site:

The story of the transformational Maximilien Robespierre is of a man fueled by a burning passion for revolutionary ideals that eventually engulfed him in their flames.

Robespierre was born in Arras, a countryside town in the province of Artois. His mother died when he was young, and afterward his father, a lawyer, left his children. Robespierre then stayed at the Collège Louis-le-Grand, University of Paris to study law. He was driven in his academic endeavors by the notion that if he followed the same path as his father, then perhaps they would be reunited. Upon becoming a lawyer, Robespierre came to respect the tranquil lives of the rustic folk in his hometown, and also to perceive their weakness. Setting himself on a quest to protect these people, he then entered politics and threw himself into the revolution happening on the streets of Paris.

Robespierre joined the Jacobin Club, where over time he became the leader of the revolution. France turned into a republic, and in 1793, Louis XVI was executed. The people fell in love with Robespierre for leading France into a new era, and at one point they began calling him the "god of the revolution."

However, there were many victims of this revolution, their lives ruined when dear family members and lovers were taken away forever, the only justification being an aristocratic lineage. One of these victims, Marie-Anne, seeks vengeance against the revolution, so she plots to assassinate the man who epitomizes the movement: Robespierre. In Paris, she sees an opportunity to carry out her purpose.

The Jacobin Club comprised legislators supported by the "sans-culotte," as the lower classes in France were called. Fellow comrades, including Georges Jacques Danton and Camille Desmoulins, had advanced the revolution with single-minded purpose, and Robespierre decided to meet with them to discuss continuing their fight to the bitter end. However, the rise of counterrevolutionary forces such as the bourgeoisie-supported Girondists, along with declarations of war by foreign countries in response to the French monarch's execution, were among the factors that flung the revolutionary government into chaos and crisis. The revolutionary ideals Robespierre sought to bring about were cast into ruin.

In the midst of all this, Robespierre would be arrested by the Girondists on suspicion of being a counterrevolutionary. Furthermore, Robespierre was informed by his close confidant Saint-Just that Danton, acting out of personal interest, had betrayed the Republic by working with the Girondists. Robespierre then forced out Danton, who argued for a realistic perspective over idealism.

Robespierre was obsessed with the revolution that, if successful, would turn his ideals into reality. But his use of fear to drive the movement was declared a "reign of terror," as Robespierre purged those who opposed his ideas, one after another.

A dazzling whirlwind of a revue about voyagers to bless Nozomi Fuuto in grand fashion as she, the recently appointed Top Star, and the new Snow Troupe embark upon their journey.

It begins with a thoroughly vivid prologue symbolizing the departure of a splendid cruise ship. The performers then wish Nozomi Fuuto the best of luck as the new Top Star with choreography inspired by her name and the four Chinese characters that make it up: 望 (HOPE), 海 (OCEAN), 風 (WIND), and 斗 (BIG DIPPER).

You can look forward to an ultimate piece of entertainment that combines the allure of the new Snow Troupe plus the aesthetics of Nozomi Fuuto's portrayal of male characters as the otokoyaku.