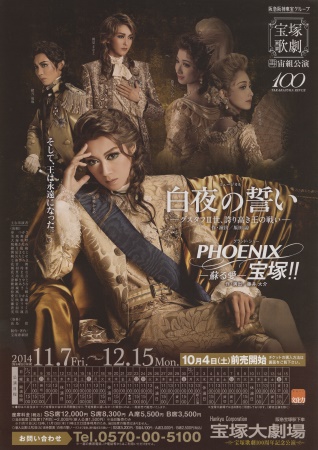 Oath of the Midnight Sun:

† Rinjou Kira was absent from Gustav III from 11/06-11/28. Her return to PHOENIX Takarazuka!! is yet undecided.

Oath of the Midnight Sun

A young man named Vasa once rose up for the sake of the independence of his motherland of Sweden, in an era when it was under Denmark's control. He won his country's freedom and became King, by using a golden sword given to him by a white eagle. It is said the sword, which Vasa kept in a deep recess of his castle, is only effective when in the hands of a King who saves this country. No one has ever seen this sword.

In 1770, Sweden's Crown Prince Gustav together with a childhood friend Anckarstrom are students in Paris. While there, he has been affected by liberal ideas, "Humans are born to be free." Gustav is convinced that a new era will arrive, one forged by the hands of the citizens, even though he himself is in line to a country's throne.

Gustav was captivated by Isabel, widow of Count Egmont. She was not only beautiful but wise, with a progressive way of thinking. Soon, Gustav will become consumed by thoughts of her until the day he confesses his love for her. But one day, he receives news of the death of his country's King. He wants Isabel at his side when he returns to Sweden, but after she learns his true social position, she firmly refuses. Leaving word that he will be certain to meet up with her again, he heads homeward together with Anckarstrom.

Back in Sweden, Gustav is aware how Minister Kranz, who belongs to a faction friendly to Russia, takes a dismissive view of the late King and is using the government to his own ends. During his trip, Gustav witnesses how farmers are struggling under the tyranny, and pledges an oath to resurrect Sweden. In the meantime, Kranz orders Lilliehorn, the Commander of the Imperial Guard, to act as a spy to monitor Gustav's movements.

A coronation ceremony is held May 29, 1772, for Gustav III, the new King. At the event, Kranz attempts to damage Gustav's pride as Sweden's King, and he warns that if Gustav fails to abide by the policies of the state, he will be forced to abdicate. Furthermore, Kranz goes to meet with Sophia, Princess of Russian ally Denmark, to prepare arrangements that would make her Queen of Sweden. Gustav, with thoughts of Isabel still on his mind, could never be expected to accept such a political marriage of convenience. But even he does not have the right to reject this arrangement. On Sophia's wedding day, Gustav remains aloof, confiding to her that he never intended to be part of this marriage.

Having found out that Kranz and his associates have received a huge bribe from Denmark, Gustav is determined to rise up together with Anckarstrom and other members of his inner circle to take power back from Kranz. He discloses his plan to Lilliehorn, telling him outright that the Commander's cooperation will be key in having the corrupt aristocrats allied to Russia arrested. The day for revolt arrives.

This show is called "Phoenix," which contains the concept of "regeneration." It is being staged in a period that connects to the era beyond our centenary, which will mark our magnificent history.

Ouki Kaname, a top star in the Cosmos Troupe, has been chosen for the Phoenix role. So please enjoy and look forward to this gorgeous, spectacular grand show, a hallmark of Takarazuka, which is composed of scenes that convey a sense of the beauty and gallantry characteristic of our male roles.