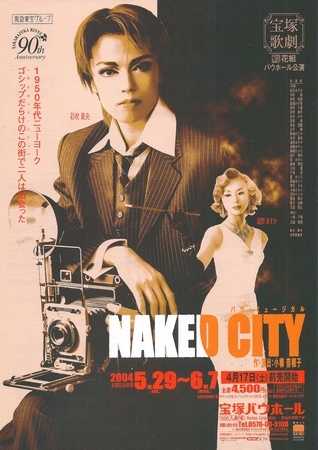 Billy "The Famous" Fogg (Ayabuki Mao) is a cameraman in 1950s New York City, who makes his living digging up scandals and other terrible things and selling his photos to the gossip mags and yellow papers. When the play opens he's listening to police reports on his radio, and then he hears that the famous actress Daisy Miller (Toono Asuka) has been seen entering a club with a mobster boss named William Wilson (Yabuki Shou). He sets out and manages a picture, but he also captures Daisy's attention. She tracks him down in the offices of the gossip paper that printed the photo and story.

Daisy offers Billy money to find someone, and she won't explain why she wants to find him or what her connection with him is. She can't ask the police; she wants Billy. His name is Nicolas Dodge (Aine Harei). At first Billy refuses, but Daisy offers a lot of money. He accepts, with the understanding that if he can't find one man in the mass of NYC's humanity, he still gets to keep the money. Daisy leaves, and the paper's editor (Itsumine Aki) orders the rather naive and optimistic new writer Bernard Stine (Misuzu Aki) to work with Billy. Neither Billy nor the hapless would-be novelist Bernard is very happy with the situation, but they go.

Meanwhile, the police are also searching for Nicolas, but they're running into trouble. The people of NY aren't interested in helping. Kindness and love are just as hard to find in NY, Jim (Yuumi Rin) and Sam (Mochizuki Rise) lament as they search. They run into Billy and Bernard, with snarkey comments passed around.

Next Billy goes for help to a residential section of the city. There we meet his sister, Edna (Kayou Kirari). It turns out that his father abandoned their mother and them, and when their mother died her friend took them in. Alicia (Rika Masumi) raised them along with her own son, Ike. Alicia is very unhappy with Billy's choice of a career, although he tells her he's doing it for money for the family. She refuses to take the money and says she doesn't want to see Billy again until he's given up his rotten job. Even Billy's sister refuses the money. Billy tells Bernard that he can't take pictures of happy things. Not until his father has been exposed and destroyed.

In another part of town the mafia bosses are putting pressure on William. They blame him for things, and in turn he passes the blame on to Nicolas. Daisy looks pained. The bosses give William an ultimatum: Find Nicolas or else. William in turn asks Daisy if Nicolas has contacted her. She says not. William becomes angry and smacks her, sending her to the floor. Then he lifts her up and gives her a ring, saying he's doing all of this because he loves her. A somewhat portly, middle-aged gentleman looks nervous, and asks William if he's sure about this. We later learn that he is Mike Binder (Itsuki Chihiro), the chief of police in NYC. William tells Mike everything is under control. All they have to do is keep an eye on the girl, and she'll lead them to Nicolas. "People in love are blind."

Billy and Bernard head into Spanish Harlem, where they find themselves confused and unable to speak to the ragged inhabitants. Bernard advises Billy that shouting probably won't make them understand him any better, which I found amusing and ironic. Ah, Japan. Eventually they manage to make out that Nicolas has been seen in an area with mannequins, but when they refuse to pay for the information, the irate inhabitants drive them out. They find themselves lost in the dark... and surrounded by mannequins. Nicolas appears with his gun drawn, and doesn't seem any happier when they tell him Daisy sent them.

"She betrayed me," he tells them. He continues: She was my woman. We both grew up in the slums of NYC, but then we got picked up by William: her taken to Hollywood to make movies, and me as one of his men. But then William suspected she was betraying him with someone, and she pointed me out right away. To save her own position.

Billy manages to talk him out of killing them, and the two leave. He goes to the Paradise Tonight club to meet Daisy. Billy's girlfriend Cathy works there, and she's not happy to see him, especially with Daisy. Billy doesn't want to tell Daisy at first, but eventually he does. Then he asks her why the police were also looking for Nicolas, if she didn't ask them. She tells him about the connection between William and Mike Binder. Then she tells him something startling: "I like your photographs. That picture you took of me... it threw away my hollowness. I think you saw me as I really was." Billy is shocked. He asks her dance with him. This scene just breaks my heart, because you can see Billy falling in love with Daisy as they dance, but this is a man who doesn't believe in love. After she leaves, Billy gets his camera, planning to follow her and take a photo of Daisy and Nicolas together. Bernard is shocked. "I told you," Billy says, "I hate a clean job."

At the mannequin storehouse, Nicolas and Daisy are reunited. Daisy pleads with him to flee with her, but he tells her that leaving the city will be the death of him. He gives her a locket, telling her that as long as she keeps it hidden and out of William's reach, William can't kill Nicolas. Gunshots ring out, and William's men appear. Nicolas thinks Daisy has betrayed him, but actually there is a tracer in the ring William gave her. Nicolas gives her the locket and tells her to run. Suddenly Billy shows himself, knocking out one of the gunmen and dragging Daisy away to safety. In the process he gets shot in the arm.

"Why did you save me?" Daisy demands angrily.

"Because you said you liked my photographs."

Daisy and the locket are soon hidden away at Madame Paradise's (Sachimi Anna). There Billy says to Bernard: "I have a truth of life to teach you."

"What is it?" Bernard asks eagerly.

Cathy confronts Billy, saying it's not like him to help someone. Does he love Daisy? "Of course not," Billy scoffs. "When I think about Daisy, my chest hurts. I want to help her." Cathy watches him leave, knowing the idiot is in love with Daisy.

Billy has Ike check out the necklace and discovers that some kind of microfilm is held inside. He also confronts Alicia and tells her he's realized the real reason he's a cameraman is simple: he loves taking pictures. She goes into her house, white-lipped and comes back out with a photo. "I thought I had thrown it away, but I still had it. Your father took it." Billy is thrown for a loop. He tells his sister that next time he comes back, he'll take a picture of her dancing. After she leaves, Billy tells Bernard why he hates Mike Binder. The man is his father.

He has discovered something about Mike Binder, though I wasn't able to make out exactly what it was. some scandal, perhaps the thing that William is using to keep control of him? Together with Sam and Jim, everyone begins to concoct a plan to rescue Nicolas and take care of William and the corrupt police chief.

They lure Mike to the gangster's den with a false letter saying that Nicolas has escaped. Billy arrives and says he wrote the letter. He also says that he knows enough to put the both of them away. Mike flees into the crowded city streets. Billy follows him with his gun drawn. Somehow they end up in the warehouse, and Mike grovels for his life.

"I have a family!" he cries, which only infuriates Billy more. He shows Mike the photo of his mother, and suddenly Mike realizes who Billy is. He grabs Billy's gun and holds it to his forehead. "I see; I get it." His life was a waste. Billy pleads with him not to do it. Just as Mike seems to be calming down, he asks about Billy's mother. "Dead," Billy says, and Mike lifts the pistol once more. They wrestle for it, and suddenly Billy shouts: "Please! Father!" The police arrive and cuff Mike and lead him away. Mike swears to turn his life around and make amends.

At the station, Billy says farewell to Daisy, who is leaving NYC to meet up with Nicolas. She tells him she's in his debt, and she'll never forgive him. He tells her his next project is going to be a photo collection about NYC, which he has discovered doesn't have an under-side — it's all NYC. He'll call it "Naked City." They say goodbye, and Daisy kisses Billy goodbye. Angst!

As Billy walks back out into the crowded streets, the corruption and greed continues around him, but he sees it with new eyes. He meets up with Cathy.