Loading...
Mt. Asama and the Lord / Love at Dal Lake 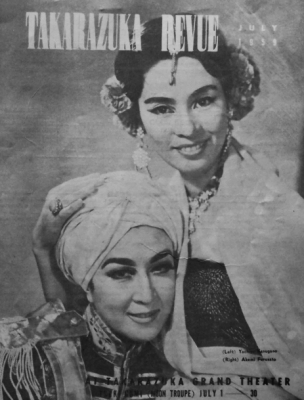 Written and Directed by Hojo Hideji


Musical Play in 15 Scenes
Mt. Asama and the Lord

A gorgeously-costumed Daimyo's procession happens to plod across the foot of Kr. Asama. The Daimyo is none else but Kunimochi Urabe, reigning over a certain province in west Japan, who is on his way along to the far off Yedo (or Tokyo). The procession is scheduled to stop over- night at the hamlet of Oiwake at the foot of Mt. Asama (near Karuizawa, a renowned summer resort), People would think that the life of a Daimyo, surrounded by splendor and luxuries, must be one of heart's content and pleasures. Just the opposite, however is the truth. Kuniomochi feels himself neither happy nor contented.

He is fed up with all the routine procedures of the day where no privacy is allowed. When he washes his face in the morning, when he takes his meals and even when he wants to relax himself in a hot bath, he is exposed too their eyes, the eyes of his faithful followers. Freedom is entirely denied from him, and monotony is the tone of his daily life. He is ever beset with the disgust of being born a Daimyo.

Now, the hamlet of Oiwake, where he is scheduled to stop overnight, happens to be in a festive mood. Prompted by his irresistible desire to be free and partake of adventures if allowed, Kunimochi, amidst the hustle of the crowded villagers, deliberately mingles among the common people, and enjoys an unshuckled time of dancing and flirting with rustic girls. He is mistaken for a roving actor, and eventually, he saunters forth to try his luck with local concubines.

As the girls sing, Kunimochi is surprised, for he finds the song to be none other than the lied which he himself dedicated to Hanasode, a concubine of Yoshiwara in Yedo, years ago when he had not be come a Daimyo and been free. Hanasode, he remembers, betrayed his amour, and ran away with another man, and as rumors say, met her tragical death somewhere in snowy northern Japan. He had not expected that he should hear the memorable song sung at this particular place and on this particular night! Kunimochi is told that the song was a favorite one with Yoshino, one of the girls at Oiwake, who, after her, have taken it up as their favorite song. Bewildered and curious, Kunimochi meets Yoshino, who turns out to be the very Hanasode, the former sweetheart of his!

The girl confesses how she was then asked by Kunimochi’s mother to part with him, and how, in tears, she left Yedo.

Overjoyed and assured of her unswerving affection toward him, Kunimochi feels his attachment to the girl re-kindled, and pledges he would never again part with her.

Alas, they are separated in social status: A Daimyo and a rustic concubine. How can they ever be united to each other?

It happens that Mt. Asama, an active volcano, erupts, and the unexpected incident provides them with an occasion to effect a happy union. Chuzaemon, one of his senior retainers, though admittedly stubborn and obstinate usually, proves to be a man of understanding and compromising.

Everything happily settled, the Daimyo procession, with the overjoyed Hanasode now participating as an additional member, resumes its journey on to Yedo under the clear sky of May.

The scene is set in Kashmir, in the northernmost part of India, where the great Indus River meanders.

In summer every year, foreign ambassadors and ministers as well as viceroys from various principalities in India gather at the Kashmir Hotel. Tonight, a ball, the last one of the season, is about to be held in the hotel.

Kamala, the granddaughter of Maharaja Chandra Kumar, the powerful viceroy of Benares, and who is promised to become the chief lady-in-waiting of the daughter of Goyar, the Grand Duke of Delhi, falls in love with Cavalry Captain Rachman, who hails from a farmer’s household.

Her amour with the captain, however, is strongly opposed to by her grandfather and grandmother and aunts, on the grounds that the young lovers are too vastly separated in their respective social position. On her part too, her passion gradually subsides, because Kamala is no less nobility-minded than her relatives.

The situation, witnesses an unexpected development as Jasvir, the stupid commander of the gendarmerie, brings the astounding information that Captain Rachman is none other than a notorious criminal named Rajendra, who is a Don Juan as well as an impostor, wanted by the Paris police. The captain, as the gendarme commander reveals, has had dubious relations with a number of noted ladies in various countries, who, because of the scandals, have either been socially disgraced or publicly forced into ignoble oblivion.

The information throws the Kumars into utter surprise and confusion. Captain Rachman alias Rajendra is given money, with the demand that he leaves the country as promptly as possible. The “impostor” however, offers a bargain – that he be allowed to pass a night with Kamala.

In the meantime, Rita, a sister of Kamala, returns from France – not alone, but, in company with Peper, her sweetheart. Chandra Kumar, her grandfather, strongly opposes to her amour: Chandra feels he cannot be led to like Peper.

Several days later, Chandra and Rita happen to come upon Capt. Rachman while driving in the suburbs. Chandra is taken aback, for he finds the captain to be the very man who saved him from the hands of ruffians on a Paris street, where he was then sojourning. Rachman is proved to be the son of Maharaja Hariram Kapur, the Grand Duke of Bengal.

Overjoyed with the unexpected reunion with Rachman, Chandra introduces him to Lyta. He confesses to Rachman about the predicament he is finding himself in because of Lyta’s attachment to a man called Peper.

Upon seeing Peper, Rachman instantly points out that he, Peper, is the very Rajendra, the notorious imposter of Paris. Thus, Lyta as well as Chandra are saved out of the impending danger of falling prey to the ruffian’s scheme.

(The inter-relations between Chandra, Rachman and Peper in Paris are related reflectively over three succeeding scenes.)

All suspicions and misunderstandings about the identity of Rachman are, thus, gone. Kamala and all the other members of her family begin to place in him unconditional confidence and affection.

Strangely, however, Rachman, now, declines it. Why? ---- He dislikes the way nobility lives; he is content with his present mode of living, and he finds himself unable to compromise with the affection and confidence offered by the nobility, which is ever under the yoke of social caste and prejudices.

“What is love? Where, indeed, can true love be found?”

He leaves India, and again sets out on an aimless and wandering journey.