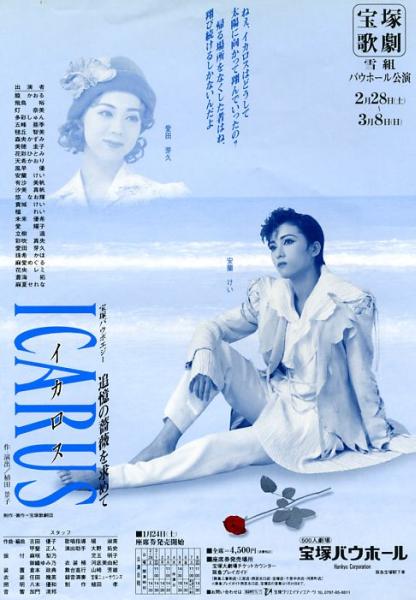 The narrator is a man named Arnold who is writing the book "Icarus" and describes for us his younger days, specifically the year 1929.

When Icarus first appears, he doesn't remember where he came from - the sky, but maybe the ocean. He is looking for his wings so he can fly away again. Arnold tells him that if he finds a rose he'll find his wings, which leads to Icarus meeting Rosey. Icarus tells Rosey that he hates flowers because they always become old and withered. When Rosey tells him that that's because they're alive, he says that in that case he hates all living things. Rosey tells him that he has an iceshard in his heart, just like in the story of "The Snow Queen" and explains the story to him. She manages to cheer Icarus up to some degree.

Meanwhile, everyone else is having problems. Claire (Rosey's sister and an actrress)and Arnold (the son of a rich man) want to be together, but aren't able to communicate their feelings. Claire tells Arnold about a big offer she's gotten to go to Hollywood - wanting Arnold to say he doesn't want her to go - but Arnold only encourages her, even though he doesn't really want her to leave. Plus Arnold and his father aren't getting along - Walter wants Arnold to be more involved in the family business, and be more like him, but Arnold wants to live his own life and is sick of being controlled by his father.

Nicole and Luchiano are also having a hard time. When Nicole met Luchiano, she rescued the young pickpocket from being arrested, and gave him a job at her club as a tango dancer. Luchiano loves Nicole, but not the life she is living. Nicole claims to be happy as the arm candy of a wealthy man (Walter), enjoying a life of material wealth but no love. Luchiano asks her why she "picked him up" anyways - he was just as well off on the streets.

Arnold and Claire watch an abandoned kitten outside in the rain, and Claire tells Arnold a story about Rosey and a pet cat. Arnold was never allowed to have pets as a child. Luchiano watchs the cat through the window, with Nicole being deliberately mean to hide her feelings - "What, do you like cats? I hate all animals!" The two end up fighting and Nicole leaves angry. By morning the cat has died, even though Icarus watched over it faithfully all night.

Crushed by the death of the cat, Icarus goes to see Rosey, who cheers him up with a story about her own cat - an abandoned one who kept coming into their kitchen, and of course once she fed it it was bound to stay, so that now it's turned into a "Buta-Neko" from eating so much. Rosey buys them both hot chocolate, and shows him pictures of her family.

But when she asks him about his own family, Icarus is at first puzzled. Then he finally remembers about his rose. His rose was his only family, and it had a beautiful flower, but no one ever took care of it, so it got sick. He tried to make it well but nothing helped. Rosey tells him that roses are very strong plants, so it will probably get better. When Arnold and Claire show up, she invites Icarus to Easter at her family's house. It becomes clear that Rosey is becoming quite fond of him - she gets a little shy.

After an enjoyable easter dinner with the family, Icarus and Rosey meet outside the house. Icarus tells Rosey he has remembered the scent of his rose, and that she has the same scent. He tells her "I love everything about you." He's been afraid to touch anything for so long, because he's afraid it will die and he'll lose it, but he can't help loving Rosey and when she's with him he feels like everything will be okay. Then he sings "Scent of Rose" and Icarus tells Rosey he loves her.

Luchiano confronts Nicole as she's going into the restaurant with Walter - and Walter realizes for the first time this threat to his hold on Nicole. Nicole makes a final attempt to push Luchiano away - she tells him she only helped him because he reminded her of her little brother in Paris, and that she's not interested in him at all. Luchiano, however, still won't give up on her. He says he'll wait for her that night outside.

Walter and Arnold argue about Arnold's future. Arnold learns from a young woman (A younger version of the reporter who interviews Old Arnold) that Claire has gone to Hollywood. Nicole returns late to Walter, and he becomes convinced that she is involved with Luchiano. He has the boy killed.

Afterwards, Walter goes over to Nicole's place and asks her "Who are you waiting for?" "No one," she replies - actually hoping that Luchiano will show up. "That person is dead, you know." Nicole is overwhelmed by grief. Walter tries to "console" her with his usual methods - he's brought her a beautiful necklace, and when this fails to work, he promises to buy her anything she wants. The scene ends with Nicole giving in, but still miserable over Luchiano's death.

Arnold goes to Hollywood and finally tells Claire how he feels. The two are happily reunited, and Claire gives up Hollywood. Icarus then helps an older gentleman whose son is a famous pilot and has disapeared. The father is heartbroken, particulary because he feels that he was never a loving father, and now maybe there will never be a chance for he and his son to have a good relationship.

Sadly, Icarus realizes that it's time for him to go home to his own world far away. Rosey wants to be with him, but apparently that's not possible. He states that he believes the reason he was travelling was to meet Rosey. And when Rosey asks him anxiously why they even met, if they can't be together, he tells her that it was destiny, and there must be a reason, even if the two of them don't understand it. There's some question of the reality of their relationship, with Icarus wondering if Rosey may just be someone in his dream. This whole scene takes place at the "Lake of Memories". Icarus leaves for his own world, with Rosey unhappy but confident in her ability to keep living.

Back to present day: Arnold is with the lady interviewer again, and she asks him why he wrote the book. "Because I'm alive!" is his response. After she leaves, we see how happy and suburban Arnold's life has become: he and Claire are happily married, and have a young daughter. Although they live modestly without the fabulous wealth that would have been his had Arnold followed his father's example, they have the happiness that comes of loving and being loved. The spirit of Icarus still watches them fondly as they go about their lives.