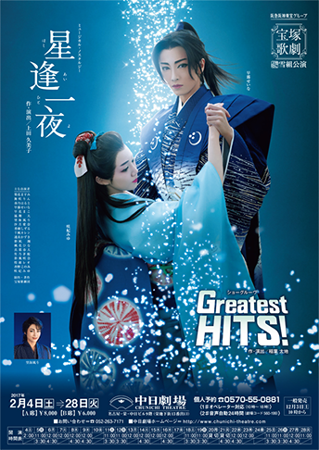 Then, the revolt breaks out. While bound by his inescapable destiny, Haruoki goes down the path he has chosen for himself.

This work premiered in 2015 and was extremely well received. For her work, Ueda Kumiko won the 23rd Yomiuri Theater Grand Prix Outstanding Director award. Its reprise will be in the Chunichi Theater.

The Takarazuka Revue’s signature Show Groove features a mesmerizing and rousing collection of popular standards. Opening with a prologue highlighting spirited soul music, Greatest Hits! features scenes with masterpieces that enjoyed great popularity in their day yet continue to tug at our heartstrings. The greatest of the Snow Troupe performers, led by the hot and sexy yet composed Seina Sagiri, combine glimmering harmonies with glamorous dance.