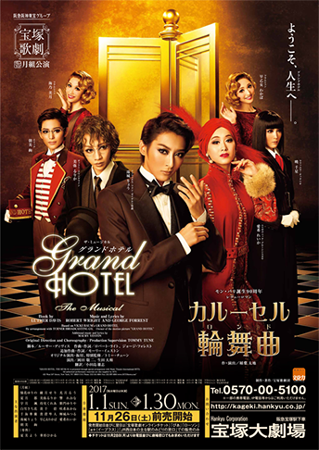 Summary information from the official site.

"Grand Hotel" is a musical set in 1928 Berlin, depicting the varied lives of guests at a luxury hotel over a day-and-a-half. The Broadway production that opened in 1989 with Tommy Tune as director-choreographer earned rave reviews and went on to win five Tony Awards. The same show was later put on in London and Berlin as well. Suzukaze Mayo led the Moon Troupe in the Takarazuka Revue's 1993 production of "Grand Hotel." Tommy Tune was invited to direct and choreograph this Takarazuka version, which went on to win high acclaim.

The Takarazuka Revue has invited Tommy Tune, who won the Special Tony Award at the 69th Tony Awards in 2015 for his many years of achievement, to serve as special supervisor as "Grand Hotel" returns to the stage at the outset of 2017, when the Moon Troupe's top star, Tamaki Ryou, will make her Takarazuka Revue debut.