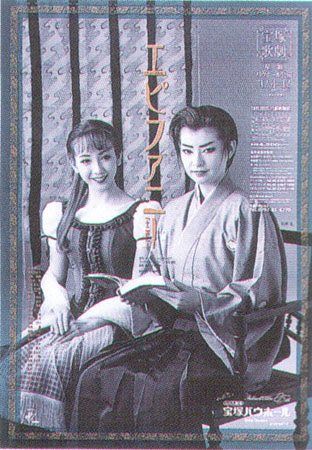 Meiji Era Japan. While en-route to Tokyo to join the Enouza theater, Takagorou disappears in Yokohama. Though his sister and the family and inn servants search everywhere, there is no sign of him. His meeting is the next day, and time is running out, so his twin sister Otaka decides to secretlytake his place and join the kabuki troupe for him, to hold his place until he returns.

Things go well, except Otaka falls in love with Iriya, the owner of the theater. Iriya was once a student of Mouri, but they had a disagreement and Iriya was thrown out. However, Iriya is still in love with Mouri's daughter, Mari. He asks Otaka to deliver his love letter to Mari.

Meanwhile, Mari is having troubles of her own, for her father is trying to set her up with Fukunaga, who she doesn't know. When Otaka arrives, she almost doesn't get a meeting with Mari, except the servant mentions she's a handsome young man. Her best friends talk her into it, so long as they all pretend to be Mari.

When Otaka arrives and reads Iriya's letter from memory, all of the girls laugh and mock it, which makes her upset. She defends Iriya passionately, and Mari is moved. She falls in love with the young messenger.

Fukunaga arrives, and Mari is not impressed by his self-absorbed attitude. He dismisses Otaka as a mere kobuki actor. He orders Otaka to leave and never come back to the Mouri household. Mari runs off, planning to atend the next performance at the Ensou and leaving poor Fukunaga high and dry.

Fukunaga orders his secretary Okada to search out information on Takagorou (Otaka). The maid servant giggles at their planning. Fukunaga plans to tell Mouri about what is going on, and the maid tells them they'll have to pay her to keep her mouth shut, but then admits to being worried about Mari. Fukunaga talks her into helping them.

Meanwhile, the real Takagorou finally appears. He has decided to stop running from the future planned for him for his sister's sake. He is saying farewell to Shingoro, who has helped him out in Yokohama. Shingoro gives him money to get to Tokyo, but tells him he can't go himself. He admits that in the past he used to be a pickpocket in Shinbashi.

We see Mouri's past, where he met the girl Elise in Berlin. But he had to return to Japan, and so he left her. He tells his daughter about Elise, but when she asks he admits he loved his wife and loves his daughter very much. However, he feels guilty for leaving Elise. Mari realizes that she is in love with Takagorou (Otaka).

Otaka admits that she wasn't able to get an answer from Mari and apologizes to Iriya. Iriya says it's no use. To cheer him up, Otaka tells Iriya about "his" little sister, and how women in love often hide their feelings despite the pain. Iriya admits to appreciating all that Otaka has done, and even goes so far as saying that he wished Otaka was a man. They are interrupted, and flowers come for "Takagorou" from Mari, which is quite the shock for Otaka.

Kirizou and Juushirou decide Takagorou is in love and needs help and head off to save him. The real Takagorou arrives, causing hordes of fan girls to collapse in awe. He is understandably confused. He can't get anyone to give him directions to the Enouza. But then Shingorou arrives to the rescue. They make plans to meet later.

The maid tells Fukunaga that her mistress is planning to meet with Takagorou, and they decide to bring Mouri to the same place to interrupt the meeting.

Meanwhile, Genji hears that Shingorou is back in town and plans his revenge. Oroku volunteers to lay a trap.

At the restaurant, things are very awkward between Mari and Otaka. Otaka tells Mari that she can't accept what comes with the flowers, because someone else loves Mari. He says they can't meet again and makes his exit. It's at that moment that Kirizou and Juushirou are discovered spying. And then Mouri arrives....

Fukunaga uses this opportunity to push his idea for a new kind of theater, one with real women instead of onnagata. Surprisingly (but not so much to us) is how excited Otaka gets about this idea. It's Otaka who finally convinces Mouri that the idea has merit.

Oroku and Shingoro meet, and manage to pick each other's pockets simultaneously. There is History between these two, and it's not very happy. During a vitrolic exchange, Oroku does manage to warn Shingoro that Genji knows he's back.

Shingorou meets Otaka, and mistakes her for Takagorou. When Otaka acts (understandably) as if she doesn't know him, Shingorou decides that his new friend has turned on him. Otaka realizes, too late, and the angry Shingorou leaves. Otaka follows him.

Meanwhile, Fukunaga's plans haven't gone quite as he meant them to, and he gets stuck with the bill as well.

Iriya meets Takagorou, and confusion ensues. Iriya warns him that word has come to the Enouza that Takagorou is in danger. Then the maid comes to lecture Takagorou about how he treated her mistress. Takagorou finally realizes what has happened, and begins to worry about the trouble he has set up that will hit his sister.

Meanwhile, Genji and his men appear and circle Shingorou. Otaka arrives and grabs a staff from one of the attackers, claiming she's very good with a naginata (A pole weapon which is now associated with women), which gives Shingorou the clue as to who she really is. Genji draws his sword on Oroku, so Shingorou drops his knife. Kirizou and Juushirou arrive with their stage prop weapons, which aren't much good. Suddenly a shot rings out. Okada and Fukunaga to the rescue!

The truth comes out, and Otaka tells them who she really is. Iriya tells her that he already knows, and Takagorou appears. Otaka runs to him.

The maid reminds Fukunaga that this is perfect for him... since he needs female actresses for his theater. She decides he's pretty helpless on his own and needs her around.

Otaka admits the truth to Mari. She doesn't take it very well. Iriya arrives and realizes what has happened. He tells Otaka not to worry, Mari will recover. Otaka needs to concentrate on her next production. Mouri arrives and makes his peace with Iriya. Suketaka arrives and blurts out that Otaka loves Iriya, but the others rush him away quickly.

Later, Takagorou finds Mari weeping. Mari realizes that this must be Otaka's older brother. Takagorou begs Mari to forgive Otaka, since it's all his fault in the first place. They fall in love.

Epiphany - Review by ekusudei
Review by Fyre
Review by bwinter