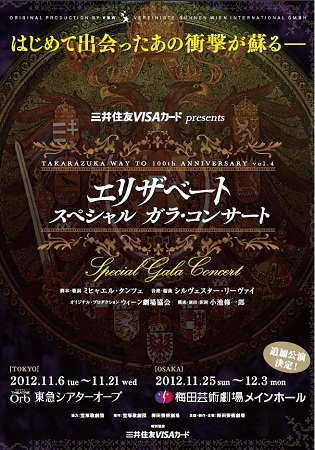 Based On: The German musical "Elisabeth", the story of the life of the Empress Elisabeth of Austria.
Author: Michael Kunze
Director: Koike Shuichiro
Composer: Sylvester Levay
Choreographer:

This is the fourth special concert in the Takarazuka Way To 100th Anniversary series, featuring OGs who (with some exceptions) acted in previous Elisabeth performances. The cast schedule can be found on http://www.umegei.com/schedule/131/index.html.

The DVD will feature two recordings of the entire performance, one with mostly the original 1996 cast (Ichiro Maki, Hanafusa Mari, Takane Fubuki and Todoroki Yuu) supported by Asami Hikaru as Rudolf and Hatsukaze Jun as Sophie, and one with the "Dream Cast" performance with Shion Yuu, Shizuki Asato, Ayaki Nao and Haruno Sumire alternating as Death, Hanafusa Mari, Ootori Rei and Shirahane Yuri as Elisabeth, Takane Fubukiand Hatsukaze Midori as Franz Joseph, Kouju Tatsuki and Suzumi Shio as Rudolf, as well as Hatsukaze Jun and Izumo Aya alternating as Sophie (with Kozuki Wataru as Lucheni throughout the performance).