Loading...
El Halcon / Ray
READ THIS BEFORE EDITING THIS PAGE 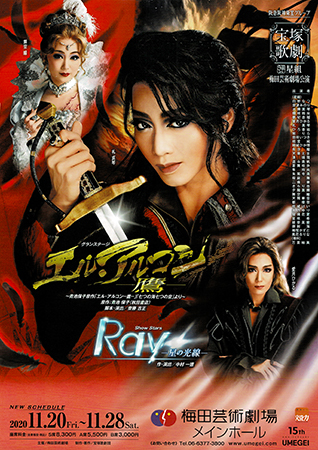 In the late 16th century in Europe, England and France are each struggling to take the naval hegemony away from outstandingly powerful Spain.

Commander Tyrian Persimmon of the Royal Navy admires Spain and dreams of conquering the Seven Seas at the helm of the Armada. He was born to a woman of Spanish noble blood. He has adored the sea since his childhood having been influenced by his mother' s cousin of Spanish origin, Gerard Peru, who is also an officer in the Royal Navy. One day Tyrian learns that Gerard is a spy for Spain and helps him elude his pursuers. Tyrian decides to realize his ambition of conquering the last ocean with Gerard 's words in his heart: "Live following your ambition. You can do it".

Tyrian has achieved the rank of Commander quite young and is winning a reputation in the Royal Navy.
At the same time, he has established his Spanish connection and is preparing for the fulfillment of his dream. Tyrian learns that Gregory Benedict, the most prosperous merchant in the port town of Plymouth, is helping the Netherlands gain independence from Spanish rule. Tyrian decides to get rid of Gregory with the aim of enforcing the Spanish rule in the Netherlands. He calls on Gregory in Plymouth and succeeds in gaining his confidence by telling him that he is going to escort Gregory's merchant ships in order to protect them from Spanish attacks. Gregory's son Luminous Red Benedict doesn't fail to notice the coldness in Tyrian's eyes. Tyrian comes across his old friend Edwin, Colonel of the Royal Army. With cunning manipulation Tyrian succeeds at furthering his own career at the expense of Edwin's, and at stealing away Edwin's fiancée Penelope, gaining the favor of her father Admiral Garrett of the Royal Navy.

Tyrian's ship leaves Plymouth and is ambushed on the high seas by Les Blanches Fleurs, a band of pirates led by Gilda Lavanne. Though being a pirate, she is a French noble whose domain is the Isle of Ouessant, the island Spain wants to occupy as its military base. With subtle maneuvers, Gilda attacks Tyrian's ship, which is invading her territory. She almost manages to defeat him; however, Tyrian strikes back so fiercely that Gilda retreats.

Tyrian meets incognito with Gilda one day and negotiates with her on the use of the sea-lanes. He asks her not to hinder his ship; in exchange he won't attack the Isle of Ouessant. She tells him that she cannot believe him, because he is a spy for Spain. Regardless of how highly they respect each other as warriors on the sea, the negotiation ends unsuccessfully.

Morale is high as England prepares to wage war against Spain. Tyrian is promoted to Captain. Gregory is tried as a traitor to England, and Tyrian is present in the court as the Navy officer in charge of the case. In fact, Tyrian had used Coalsack, a merchant of Plymouth, to plant in one of Gregory's ships a fake personal letter addressed to Gregory by the Duke of Palma, a famous Spanish military figure. Gregory was arrested, as Tyrian had planned, and sentenced to death. After the reading of the judgment, Gregory's son Red is furious and confronts Tyrian. He claims that Gregory is innocent, and vows that he will find out the truth so that justice can be done.

Tyrian succeeds in catching Gilda after several fierce battles against Les Blanches Fleurs. He is so enthralled by Gilda, the brave woman pirate that he wishes to make her his woman, by force if necessary.

Red, who has joined a band of pirates, is looking for a chance for revenge against Tyrian on behalf of his father. One night he steals into Tyrian's house. Burning with rage against Tyrian, Red initiates a violent sword fight. It becomes apparent that Tyrian's swordsmanship is superior to Red's. Red is forced to retreat without achieving his vengeance. Now that Tyrian has seen Red in this unexpected place, he renews his desire to defeat this new enemy.

Gilda is attracted to Tyrian, yet she is embarrassed by her feelings. One day Tyrian tells her that he is exiling to Spain soon, and asks her to come along with him. She is less zealous than before about sailing the high seas, asking only that he not attack the Isle of Ouessant. They then hear the news that Gerard has occupied the island. Tyrian rushes to the island, where he sees Gerard whom he once admired. Tyrian decides to arrest this traitor of England in order to strengthen his status and achieve his ambitious goal.

Tyrian leaves for Spain, and is intercepted on the way by pirates led by Red. Tyrian's crew is terrified by the surprise attack. However, the Armada arrives and rescues Tyrian's ship. Tyrian reaches Spain safely and takes exile there. He is welcomed by the Spanish Navy and permitted by Admiral Santa Cruz to build a new warship. Standing on the soil of Spain, the country he so admires, he is moved by a sense of fulfillment. He promises his beloved Gilda that he will show her the Seven Seas under the Seven Skies.

The time for a decisive battle between England and Spain has arrived. Tyrian boards the flagship, El Halcón (The Falcon) and commands the Armada he dreamed of, heading for England where he was born and grew up.

Rays can come in the form of light and heat. This show represents the beginning of another era for the Star Troupe with the emergence of the troupe's top star, Makoto Rei, and a fresh start led by a new top pair comprising herself and Hitomi Maisora. Rei will be a ray, radiating light along with her shining Star troupe members as they sing and dance with fervor upon the stage. In this show, the gorgeous songs and choreography are all designed around themes of beauty and light.