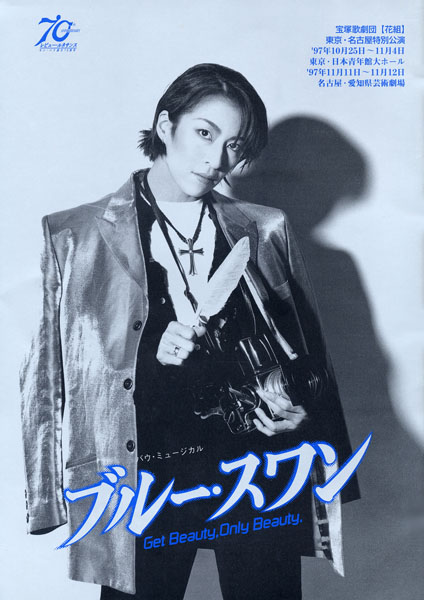 By day a world-famous fashion photographer, by night a masked jewel thief called Blue Swan with the motto "I love only beauty". This is a romantic mystery full of thrills and suspense.

Milano, Italy. The most popular fashion photographer, Alex, is pestered by his designer partner Isabella to come with her to help with the betrothal ceremony of the princess of a small island in the Mediterranean, called Montevici. At first he refuses, planning a trip to Paris, but a message addressed to the famous "Blue Swan" appears in his mailbox. He distracts his partner by sending her to tell the police, because he doen't want anyone to know that he is the Blue Swan.

Alex follows the message's instructions and, mid-heist, meets the sender, who calls himself "Cheshire Cat". Cheshire Cat knows that Alex is the Blue Swan, he says, because he works for Interpol. He offers to wipe Alex's files if Alex will do a job for him: steal the jewel from the betrothal tiara of Montevici. If he won't do the job, the Cat threatens to reveal Alex's secret life. Alex agrees.

In Montevici Alex meets the royal family and the business tycoon who is marrying his son to the princess. The son, Bernard, is a completely selfish and rather nasty young man who mocks Alex's profession. The Empress Marie Louise of Montevici worries about her granddaughter's unhappy future.

The royalty leaves, and Alex has a spat with his partner Isabella, who helped raise him when he was younger and is his current lover. He tells her he wants to break it off with her and simply be business partners. She accuses him of loving jewelry more than people and slaps him.

A young woman has come in and seen this. She offers Alex her handkerchief to dab up the blood on his cut mouth, and the two talk. She recognizes him as the famous photographer and gets him to sign her T-shirt. Her name is Sandy. She's an art history student from Paris, she tells him, here to visit the palace. She comes here often. They part, with a promise to meet up later that night at a club in the city.

After Alex is gone, the royal family comes back through the hall and sees Sandy. But Sandy is actually Sandra, the princess who will be getting engaged. It's fairly obvious that she doesn't like her soon-to-be betrothed much at all, and she sneaks away as soon as she can.

At the club several young men are singing and dancing to entertain the ladies. They are all members of the royal guard, though now out of uniform. Alex enters, and his good looks immediately get him all the attention. He shows the young men how the song they're singing should be sung. Their leader Julian is terribly jealous, but is soon distracted when Sandra enters in disguise. Eventually she is found out, but she and Alex don't get much time to talk before the dancing starts. Julian and the other young men beg Alex for help. It seems that Sandra's older brother is in charge of choreographing the ceremony and he has his heart set on ballet. Alex agrees to help them rescue the ceremony. Bernard appears and insults Sandra and her country. Alex gives him a good punch in the mouth for it, and Bernard leaves cursing him.

Bernard's bodyguards are Russian, and are actually part of the Soviet mafia. Bernard has made a deal with their boss and provided them with the instructions needed to make a replica of the royal tiara. He intends to switch the two tiaras and make a fortune. He has big plans for his own future.

Sandra talks to Alex in despair, because she really doesn't want to marry Bernard. She has been putting off giving him her answer for days. She tells Alex she wishes the tiara were stolen so that she didn't have to get engaged, because without the tiara there can be no ceremony. Alex yells at her, his own guilt driving his vehemence. After all, it's her country's treasure. Suddenly he gets a phone call, a prodding from the Cheshire Cat.

Sandra finally gives Bernard her answer, and it's "yes". She does it for the money he will bring her and thus her country. That night several things happen. One of Bernard's bodyguards, Misha, seduces the maid Gigi and gets her drunk. Gigi has the keys to access the tiara. The Russians make the switch. Meanwhile, Alex cables into the chamber to steal the tiara. As he's pulling himself out his winch gets stuck. He dangles helplessly while a huge group of people comes in and discovers the tiara missing. It's Sandra, Julian, and the rest of the guard. Alex's identity as the Blue Swan is revealed.

Sandra decides not to turn him in, though a huge search is taking place in the palace for the tiara and the Blue Swan. It turns out that she was there to steal the tiara herself, so that it would be missing the next day and the ceremony couldn't go forward. They admit their attaction for each other, and Alex decides to photograph Sandra in the tiara. However, when she tries it on she notices a difference in the weight. Alex studies it and realises that it is a fake! He runs off to find the culprit.

While searching, he runs into Isabella coming out of Bernard's father's room. It turns out that the two of them had been lovers once, though Isabella dumped him for much the same reasons Alex dumped her: she wanted to focus on her career. Alex takes a moment to cheer on his new "pop". Isabella is mortified that Alex saw her with Carlo.

In his rooms, Bernard is terrified, because although he has the real tiara, with the fake missing he realises the ceremony can't go forward. He's desperate to get his hands on Sandra. He goes to her room and sees her with Alex. He confronts her, and she lets slip that she knows the stolen tiara is a fake. Misha and the others in the bodyguard threaten Sandra with truth serum and then a gun until she reveals where the fake is hidden. Bernard forces her to sign a piece of paper, and then they kidnap her.

Meanwhile, Alex and Julian have realised that Gigi is missing. Alex manages a last-minute rescue of both the tiara and Gigi from the smuggling ship that was about to leave port.

The betrothal ceremony begins. Sandra's brother reads a letter from her, because she has become ill and can't come to the ceremony herself. However, a power-outage occurs and suddenly the room is filled with Blue Swans (actually the guard in the costumes they were supposed to wear for the ceremony). Amongst them, the real one stands up and accusses Bernard of switching the real tiara with a fake one. Suddenly, Sandra appears, and she's not ill at all! The truth is revealed about Bernard and Alex.

Alex is to be turned over to Interpol. Sandra tells him to take the tiara with him, as a man's freedom is worth more than a jewel. After her impassioned speech, Alex reluctantly agrees to call the Cheshire Cat. He dials on his cell phone, and suddenly, somewhere in the ballroom another phone rings! The grand chamberlain answers his phone. He was the Cheshire Cat! Actually, he used to work as an Interpol spy for a long time, and Marie Louise knew his secret because they were lovers. She convincd him to pull the trick on Alex so that he would steal the crown and the ceremony couldn't take place.

So Alex is pardoned and everyone is happy. A new betrothal ceremony is planned... for Sandra and Alex.