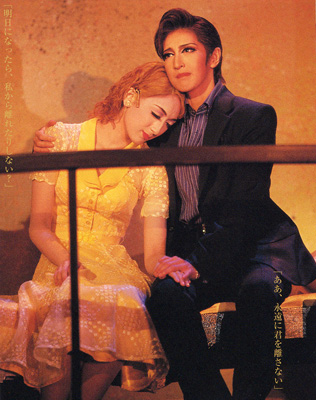 There is a certain hotel which caters to people who have lost their way. People trying to get their lives back on track, or simply trying to find out where they went wrong. One of the people staying at this hotel is Wolf, who playfully follows the self-absorbed young Anna around the hotel. No one knows what he did before he came there, though he used to joke that he was an assassin. Anna is a one-hit movie actress who now spends all of her time cultivating "patrons" to support her.

Orlando is an old friend of Wolf's, and, we learn, still employed by the mafia they once both worked for. The mafia boss, Gautier, has sent Orlando to look for Wolf, but Orlando tells Gautier that he can't find Wolf anywhere. The boss tells Orlando that he's willing to forgive Wolf's betrayal if the man comes back to work for him again, but when Orlando tells Wolf this, the man refuses. He doesn't want to kill. He is hoping to find his lost humanity again.

One evening, a new man stumbles into the hotel and collapses, barely able to gasp out that he wants no ambulance and no hospital before he loses consiousness. When Orlando goes to help carry the man to a room he drops him in shock. This man, Leonard, was Wolf's last target. Orlando begs Wolf to leave the hotel before Leonard recognizes him, but Wolf is stubborn.

Late that night, Leonard and Wolf meet in the lobby, and at first Wolf tries to hide his face from Leonard. But then Leonard admits that he has lost his memory. He only tells Wolf this, he says, because he feels some kind of connection to him. Reassured, Wolf sits and talks with him.

The next day, Gautier again presses Orlando to see if he is truly doing his job to find Wolf. Later, two women from an old job of Anna's come to tell her that she is being sued, so she'd better find a good lawyer. Desperate, she calls her patrons, but all turn a cold shoulder when they hear she's in trouble. Realizing, perhaps, the truth of how she has been living these past several years, Anna throws off any attempts at consolation.

Wolf has a sudden blinding pain in his back, and Orlando appears with the medication he always keeps ready to supply for his friend. Later, at the bar, Anna's friend Sara, a woman known to live in a dreamworld where everything is like the movies, mentions that the pills Wolf took remind her of the medication her father was taking before he died.

In all the excitement, the main players are out of their rooms and away from the TV, so they miss the news report and missing person information that flashes across the screen along with an image of Leonard. Someone is looking for him. Shocked and excited, at least two of the hotel residents call the number and report.

Outside, Wolf talks with Anna. It turns out that he saw her movie once, and she had some quality then which he felt so deeply that it made him change his life. They talk, comparing each other to restless cats. Both are strong and reslient, and both have a problem conforming to normal life. They click.

Inside, meanwhile, Sara continues her pursuit of Leonard, who she feels appeared at the hotel because they were destined to meet. The two finally click as well.

A television news crew descends on the hotel, catching Leonardo by surprise. His wife comes as well, begging him to tell her why he's been missing for two months? Why didn't he call? Does he not love her any more? Through all her entreaties, Leonard sits as still as a rock and stares straight ahead. Unable to take it anymore, Wolf breaks free of Orlando's grip and steps in front of the live TV camera to order them to stop. He tells them that Leonard has been an amnesiac, that he wants to recover his memory on his own power.

As she leaves, Leonard's wife begs him to return home for their daughter's birthday. The news crew and hotel guests filter out. Leonard shakes his daze off long enough to thank Wolf, who simply grunts and goes to his room. Anna remains to ask Leonard, who is a lawyer, if he can recover his memory and help her in court. He tells her he's not the one to protect her, and she leaves.

Because he saw Wolf on TV, the mafia boss Gautier shows up at the hotel. They talk, and Wolf refuses all entreaties and threats to finish off his last job and kill Leonard. Gautier talks to Orlando, warning him that one way or another, loose ends WILL be tied up.

In the hotel lobby, Anna admits to Sara that she's pregnant with Wolf's child and she's not sure what to do. Should she keep it? Sara is aghast, and tells her that it's a new life she has there and that Wolf will be thrilled. Anna is taken with the idea of having made a new life, although hers seemed so wasted. She still worries about telling Wolf, though. Sara tells the other hotel guests the good news and they plot a secret wedding. Leonard gets Wolf into his tux by telling him it's a fancy ball. Poor Wolf is taken by surprise when Anna steps out of her room in a wedding gown. She tells him the news, and Wolf is ecstatic. Everyone celebrates.

Late that night, or rather in the wee hours of the morning, Wolf walks into the darkened lobby to find Leonard. "Have you come to kill me again?" Leonard asks. Wolf realizes his memory has returned. Leonard demands to know why Wolf didn't finish the job that day two months ago. Wolf replies that when they met he realized he couldn't kill him, for he knew him in another life. In his life before he was Wolf, when he was a child, he had a friend that he played with every day it was sunny... No, he couldn't kill Leonard. He talks about wanting to live again as a human being, and how he had intended Leonard to be his last job, but when the moment finally came he realized he couldn't kill Leonard and then try to live a normal life.

Leonard reveals he never lost his memory. He goes back in history a bit and talks about how his father's company went under, he went into debt, and killed himself. His family fell apart. Leonard went ahead, determined to graduate from college and become a lawyer. Wolf says that's just like him, but Leonard argues, saying he was searching for the man who caused his father's fall for revenge. He was driven, and this time it was his family who suffered and he who was ordered killed. That night, when Wolf came after him, he was supposed to meet the man who killed his father. When Wolf failed to finish the job, he decided to play dead and go into hiding so that he could start again on his revenge. When he met Wolf again in the hotel he decided to play the amnesiac to get information from him.

But, he says, thoughts of revenge began fading, particularly when Wolf stepped in front of the TV crew to protect him. He remembered that living for others is more important than revenge. They admit to their new friendship, and then Wolf asks Leonard a favor. He wants him to look after Anna after he has gone. Leonard says he must really love her? And Wolf admits he himself was surprised, that he was still able to love. Leonard agrees, but tells Wolf jokingly that he's expensive. They swear friendship.

Later still, the hotel owner's long-lost lover whom she has been faithfully waiting for since the war returns in her dreams. She passes away quietly in her sleep and the various hotel guests find themselves packing their things and scattering to various places to start again. Nearly all of them have managed to turn their lives around in the last few months, and they leave hopefully.

Wolf and Anna talk, and Wolf says how wonderful women are, to be able to make new life. She points out it's his child too. They talk about their fickle cat tendencies, and how their child will most definitely be 100% wandering cat. Anna knows Wolf will disappear soon, and she is prepared to raise their child alone. Wolf tells her he loves her and will never let her go. She falls asleep and he tucks her into bed. As Wolf leaves the hotel that night, Orlando emerges from the shadows of the hotel lobby, checks his gun, and follows.

The next morning, Anna leaves to face her future bravely alone, taking her memories with her. She finally says the words out loud, that she loves Wolf, forever.