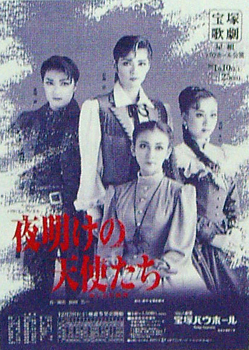 Based On: Prequel to the show of the same name performed in 1997.
Author/Director: Ogita Kouichi
Composer: Takahashi Kuni
Choreographer: Ueshima Yukio, Iga Yuuko

A companion piece to the 1997 Nippon Seinenkan "Angels at Dawn". This musical tells the tale of Joshua Barton, a story taking place before the events in the 1997 musical.

Ash Creek is a town that grew from the influx of people moving west during the Gold Rush in 19th century America.

The town is under control of the outlaw Branton gang. Joshua Branton is the son of the gang's leader, Barry Branton. Familiar with the violent behavior of the outlaws, Joshua wants to be of use to the people of the town frightened by his father.

One day a young man named Allen Sloane appears in the town. Allen has a daredevil and audacious attitude, and without telling the town anything about his origins or past, or his reasons for coming to town, he picks a quarrel with one of the Branton gang, named Clarence. Joshua meets Allen and is interested in him. Indifferent to Clarence's bewilderment, Allen joins the Branton gang.

Branton brings a girl home. The girl is Sheryl, who was attacked by Branton while traveling with her father. Branton killed her father and took her captive.

Joshua pities the girl and plans to rescue her. In turn, Sheryl holds Joshua in good favor, but is torn since he is Branton's son.

Meanwhile, Allen brings Clarence and the others out to a vein of gold. It is on land protected by a brother and sister with Indian blood, Oldran farm.

Joshua lets Sheryl escape, but yields to Branton who stands in their way. Taking advantage of the incident, Joshua's mother (who has long held antipathy towards her husband), leaves her son behind and runs away from the homestead. Tormented by his sense of helplessness, Joshua meets Angela while wandering the prairie....